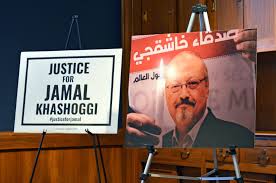 The US has announced it will release intelligence papers about the murder of Saudi journalist Jamal Khashoggi. Photo: POMED/Flickr

As the 46th session of the United Nations Human Rights Council (HRC) continues this week, ARTICLE 19 welcomes the Biden administration’s plans to release intelligence documents relating to the murder of Saudi journalist Jamal Khashoggi. His violent death in October 2018 revealed the lengths the regime of Saudi Arabia is willing to go to silence its critics.

“Moves to make intelligence documents public sends a clear message that the US is prepared to take a stance on Saudi’s attacks on its people and their freedoms,” said Quinn McKew, Executive Director of ARTICLE 19. “At the same time, it should take similar steps and let other leaders know that such an approach – and indeed these values – will be applied in their dealings with states across the region. The US government should state clearly its intention to place the protection of journalists and activists at the core of its emphasis on human rights.  It must also unequivocally demand to end impunity for violence against journalists and greater transparency across the Middle East.”

The findings of the Office of the Director of National Intelligence report, which is due to be published on 24 or 25 February, conclude that Saudi Crown Prince Mohammed bin Salman ordered the 2018 murder. It confirms the conclusions of the 2019 report of the UN Special Rapporteur on extrajudicial, summary or arbitrary killings, Agnes Callamard. The Special Rapporteur demanded an investigation into the chain of command to identify the masterminds, as well as those who incited, allowed or turned a blind eye to the murder of Jamal Khashoggi, including the crown prince.

President Biden is expected to call King Salman on 24 February, ahead of the release of the report. The move is significant because it will be the first call between the two leaders since Biden became president. It is also significant because Biden will be speaking to the king as the official state leader, and not the crown prince, routinely referred to MBS, who effectively runs the country.

Joe Biden’s administration has stated its intention to strongly support human rights, the rule of law and accountability. With the US re-engaging with international human rights mechanisms, the new Secretary of State Anthony Blinken has expressed an intention to re-connect with the HRC “immediately and vigorously”. ARTICLE 19 welcomes these measures, and the first steps the administration has taken: focus on the Khashoggi case, promises to bring peace to Yemen, and a willingness to rejoin the Iran nuclear deal.

The continued threat of impunity across the Middle East is a powerful call to the Biden administration to demonstrate the US’ renewed commitment to promoting and supporting human rights standards and values around the world. The Khashoggi documents are a key first step in this process, but their release must be followed by action to prioritise human freedoms over political power and geopolitical gains.