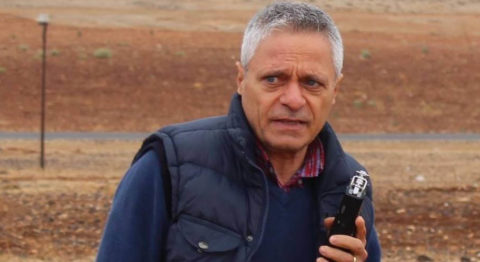 Italian journalist Mariano Giustino has been reporting on Turkey, its politics and foreign relations, since 2004. Currently, he’s a correspondent for the Italian radio station, Radio Radicale where he hosts two weekly programs: Turkish Press Review and Turkish Diary. He also posts about Turkish politics and social issues on his personal Facebook page, which he sees as the equivalent of a newspaper for people interested in Turkey.

On April 16, Giustino posted about Alaattin Çakıcı, a convicted murderer and notorious mafia boss, who had been released from prison the previous day, as part of an attempt to stop the spread of coronavirus. Çakıcı belongs to the far right Grey Wolves movement and the Party of the Nationalist Movement MHP, which supports Turkey’s President Erdoğan. Giustino’s posts on Facebook and Twitter said:
“Turkey: last night, thanks to the law on penal execution, organised criminal and member of the Grey Wolves, Alaattin Çakıcı, was released from prison. This new law has allowed 90,000 prisoners to have their sentences reduced, but not journalists, politicians from the opposition and human rights activists @RadioRadicale”.

Immediately after posting this message, Giustino’s Facebook account disappeared. After he requested an explanation, Mariano received the following message:

“We have received your information. If we notice that your account does not respect our Community Standards it will stay disabled. We always take care of security on Facebook, even when you aren’t able to use your account”.

Giustino repeatedly tried to contact Facebook to find out why his account was closed. It took over forty days for it be reinstated; he still doesn’t know why it was closed in the first place or whether it will happen again.

The closure of his Facebook account not only impacted Giustino’s freedom of expression as an individual but also his work as a journalist, which is protected under the Italian constitution.

Giustino has said he will keep asking Facebook why they censored him until he gets an answer.

“Facebook should not arbitrarily decide who gets to express a view and who doesn’t.

“It is my duty to keep challenging this – not just because of my personal situation but for all journalists who are working under difficult conditions around the world, and who already face intimidation, blackmail and violence for their work. They should not also be subjected to censorship by a social media company.

“Facebook is a private company but it has created a public space, where the rights of every user should be respected.

“There are basic democratic principles: we have a right to know and a right to freedom of expression. Facebook should protect both.”

Mariano has joined the Missing Voices campaign that is calling on Facebook and other dominant social media platforms to ensure every user has the right to remedy when content is wrongfully taken down. The campaign is demanding platforms to provide accurate notice, appeals and transparency to users who have been wrongfully suspended or content taken down.