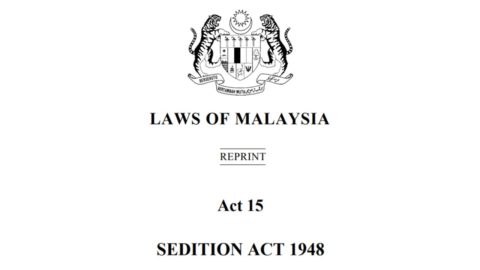 In a written reply to a question during the current session of Parliament, Home Minister Hamzah Zainuddin stated that the Sedition Act 1948 was needed to address the spread of false information or communications that threaten public safety. He suggested that the government depends on the Sedition Act to address cases concerning sensitive issues such as race, religion, royalty and special constitutional rights.

ARTICLE 19 has regularly called for the Sedition Act to be repealed in its entirety.

“The Perikatan Nasional government, like its predecessors, has used the Sedition Act to silence critics and smother public discourse. The government should break with past patterns of repression and repeal the Sedition Act in its entirety.

“The notion that speech must be restricted merely because it touches on sensitive societal issues is fundamentally flawed. Disagreement is intrinsic to democracy, and dialogue is necessary to find consensus.

“The Sedition Act is incompatible with the right to freedom of expression and has no place in a free and democratic society. Its continued use will only drive a wedge in Malaysia’s existing social divisions.”