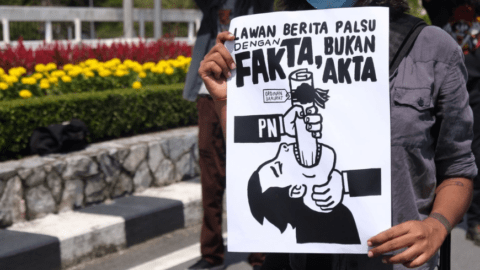 The poster reads: 'Fight fake news with facts, not acts'

In March 2021 the Malaysian Emergency (Essential Powers) (No. 2) Ordinance 2021 (the ‘Fake News Ordinance’ or ‘Ordinance’) was adopted. ARTICLE 19 has conducted a legal analysis of this Ordinance, analysing its compliance with international freedom of expression standards. The Ordinance—which was promulgated without parliamentary approval using COVID-19 as a pretext—revives the draconian provisions of the Anti-Fake News Act 2018 (the ‘2018 Act’), repealed in October 2019 by the Malaysian Parliament. This analysis builds upon ARTICLE 19’s previous analysis of the 2018 Act citing its repressive nature and ramifications for freedom of expression in the country.

ARTICLE 19 finds that the Fake News Ordinance is a problematic governmental measure because it not only revives the draconian provisions of the 2018 Act but also takes some of them further into areas that are irrelevant to public health or the COVID-19 pandemic. The Ordinance significantly threatens freedom of expression in Malaysia at a time when more information and scrutiny by the media and civil society is paramount. During a public health emergency, open and transparent media can save lives.

ARTICLE 19 highlights the following concerns regarding the Ordinance:

In practice, the Ordinance will operate to prevent any criticism of the government’s COVID-19 response. It provides no legal recourse and virtual immunity for the government in using the Ordinance to silence dissent or suppress freedom of expression. The provisions are not well-defined in law, and thus fail the test of legality under international law. The Ordinance is neither necessary to pursue legitimate aims, proportionate to achieving those aims, nor the least intrusive instrument amongst measures which might achieve the desired result.

The rapid enactment of the Ordinance without any effective public consultation or legislative oversight raises significant concerns regarding the protection of freedom of expression and access to information in Malaysia, particularly during the critical period of the COVID-19 pandemic.

ARTICLE 19 calls on the Malaysian government to immediately repeal the Ordinance.