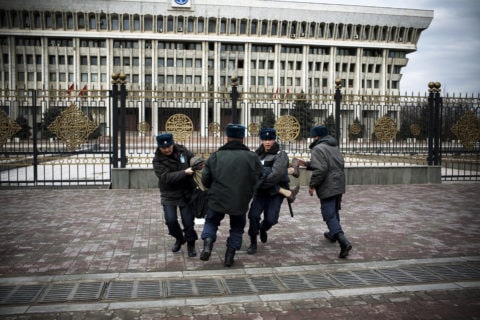 Maxim Kuleshov, government opponent and human rights activist, is violently arrested at a protest calling for the resignation of President Kurmanbek Bakiyev. Later he was placed in the Bishkek psychiatric facility, which once housed Soviet dissidents.

In November 2015, ARTICLE 19 analysed the Kyrgyz Law on Extremism Activity (the Law). The review of the Law was prompted by recent proposal for the amendments to the Laws, initiated by the Ministry of Transport and Communications. The amendments are currently being debated in the Working Group involving various government institutions as well as civil society organizations The proposal to update the Law comes amidst growing concern domestically and internationally about increased radicalisation and violent extremism in the country, following evidence of Kyrgyz citizens fighting for Daesh (or so-called ‘Islamic State’).

According to the Ministry of Transport and Communications, the Law should be amended to develop clear procedures for blocking Internet resources containing materials of an extremist nature. In a statement issued on their website, the Ministry expressed concern that the internet enables prompt and anonymous dissemination of information to diverse users, rendering it vulnerable to abuse by destructive and extremist influences.  At the same time, a lack of uniform legal practice, difference in understanding and interpreting the law by state bodies has led to a number of incidents of unjustified blockings of websites, without a court decision. The aim of this analysis is to assist the Working group to reform the law in line with international standards.

In the analysis, ARTICLE 19 concludes that the Law is drafted in such vague language that it allows for disproportionate restrictions to be imposed on freedom of expression, freedom of association and assembly and freedom of religion. In particular, the Law fails to give a sufficiently precise definition of ‘extremism”. Instead, it provides for a mishmash of terrorism-related language with references to incitement to discrimination, hostility or violence on discrimination grounds without ever defining any of those terms.

Given the broad powers of the authorities and the courts to liquidate NGOs and religious organisations, which seem to be particularly targeted by the government, the Law is almost certain to have a chilling effect on freedom of expression. It is also hard not to see the adoption of this Law as an illegitimate attempt by the Kyrgyz government to restrict civil space and shut down minority voices. We therefore recommend that the Law should be re-drafted in its entirety.