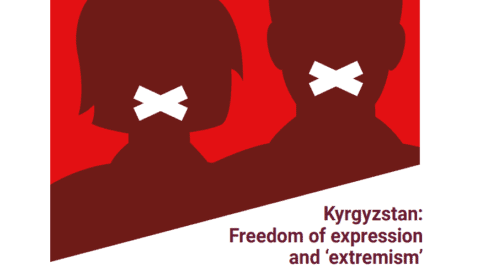 In this report, ARTICLE 19 and the Media Policy Institute examine the Kyrgyzstan law on ‘extremist’ content, specifically the part on restrictions that are typically referred to as ‘hate speech,’ and the implementation of this law in practice.

Similar to many governments around the world, Kyrgyzstan developed and adopted legislation and regulation to combat ‘extremism.’ ARTICLE 19 and the Media Policy Institute note that there are several key problems in the national legislation as well as in its enforcement. Due to its overly vague and undefined terminology, there is a high risk of overbroad interpretation and application of law. This is particularly troubling where the law provides severe criminal penalties for individuals who break it. Under its current form, ARTICLE 19 and the Media Policy Institute believe that the applicable legislation does not meet the requirements laid out in Article 31 of the Kyrgyzstan Constitution nor the State’s international human rights obligations.

In this report, ARTICLE 19 and the Media Policy Institute also provide a case study of the “September TV” case that demonstrates how this legislation is applied in practice. In August 2018, an interview broadcast by the channel was considered “an extremist material”. On that basis a district court in Bishkek, satisfied the Prosecutor General’s request to permanently terminate the operation of the channel and ban the distribution of any programmes produced by the channel through any other media. This case shows how ‘extremist’ content laws can lead to severe restrictions on freedom of expression.
ARTICLE 19 and the Media Policy Institute highlight that decisions such as these are possible due to ‘extremist’ laws having an overbearing scope and not sufficiently protecting freedom of expression.

– The Government should urgently review its ‘counter-extremism’ and ‘hate speech’ legislation and bring it to full compliance with international freedom of expression standards. The ‘counter-extremist’ laws in their current form should be repealed. In particular, provisions on Articles 313 and 314 of the Criminal Code should be substantially revised and Article 315 of the Criminal Code should be repealed.

– In all relevant legislation, prohibited forms of ‘hate speech’ should be defined in a consistent manner, and terminological uniformity should be observed. This includes a consistent approach to protected characteristics;

– All legal restrictions on ‘hate speech’ should be compliant with the requirements of legality (i.e. they must be sufficiently clear and precise), necessity (i.e. they must be necessary to achieve one of the legitimate aims of limiting freedom of expression under international law, such as protecting the rights of others), and proportionality (i.e. a particular restriction can be imposed only if a less restrictive alternative is not sufficient). All legal restrictions on ‘hate speech’ should be formulated with reference
to the six-factor test set out in the Rabat Plan of Action.

– The courts should interpret and apply all legal provisions restricting ‘hate speech’ and ‘extremism’ in a manner consistent with the requirements of international human rights law. In determining if a particular statement falls under a prohibited category, analysis should never be limited to the language of that statement. The courts and law-enforcement authorities in charge of investigating ‘hate speech’ cases should always establish the speaker’s intent to cause prohibited consequences. Furthermore,
they should always consider the likelihood of harm to be caused by the statement – and, to that end, the context in which it was made, its extent and magnitude, and the speaker’s position and their authority or influence over their audience;

– The courts and law-enforcement authorities should minimise their reliance on expert assessments in ‘hate speech’ cases. They should only seek expert opinion when specialist knowledge is truly needed to interpret or assess particular evidence. The courts should never substitute their own assessment for the analysis performed by experts;

– Judges, law-enforcement officials and other relevant officials (e.g. those involved in media regulation) should be provided with comprehensive and regular training on international human rights standards and comparative good practices relating to ‘hate speech;’

– In collaboration with experts and civil society, law enforcement authorities should develop investigative guidelines on the prosecution of ‘hate speech’ cases in line with international human rights standards.