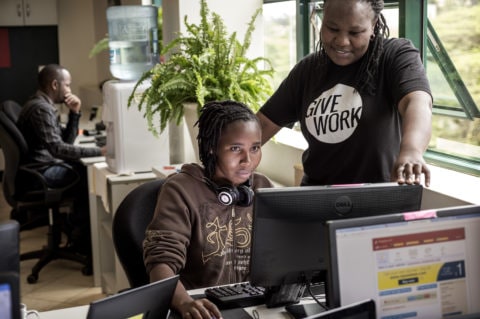 24 year old Winnie is watched over by supervisor Monicah Njuguna at the Samasource office. Samasource (San Francisco based non-profit organization) has an office in Nairobi from where they train and employ young people from disadvantaged backgrounds: unemployed youth from the slums of Nairobi. Samasource is an innovative social business that connects women and youth living in poverty to dignified work via the Internet. Samasource breaks down complex data projects from large companies into small tasks that can be completed by women and youth with basic English skills and a few weeks of computer training.

ARTICLE 19 welcomes the news that Kenya’s law on the ‘improper use of a licensed telecommunications system’ has been declared unconstitutional. ARTICLE 19 petitioned the High Court in Nairobi that the provisions were vague, uncertain and an unjustifiable limit to the freedom of expression, as well as violating basic criminal law principles.

Today, 19 April, Justice Mumbi Ngugi declared that the provisions of Section 29 of Kenya’s Information and Communication Act (KICA) are indeed incompatible with the Kenya Constitution on these grounds, declaring them ‘null and void’, in agreement with ARTICLE 19’s intervention.

“This judgement is a huge win for freedom of expression in Kenya, and an encouraging step towards respect for human rights, especially online. We have been increasingly concerned by the repressive use of this law against those expressing dissenting opinions online. ARTICLE 19 is pleased to see that this substantial threat to freedom of expression has been recognised by the courts,” said Henry Maina, Director of ARTICLE 19 Eastern Africa.

Section 29 of the Kenya Information and Communications Act (KICA), regarding ‘improper use of a licensed telecommunications system,’ has been increasingly used by state officials to target those communicating online. In 2015, a number of social media users were arrested and charged under Section 29, which criminalises publishing information online deemed unlawful by the authorities. The terms of the law are extremely vague, including terms such as ‘grossly offensive’, ‘indecent’, ‘obscene ‘menacing’, ‘causing annoyance’ ‘inconvenience’ or ‘needless anxiety’. The judge today ruled that, as well as being overreaching and broad, this section is in contradiction of Article 33 of the Kenya Constitution, which guarantees the right to freedom of expression, including the freedom to seek, receive, or impart information or ideas.

ARTICLE 19 welcomes the news that this provision has been declared unconstitutional, and urges the Kenya government to revoke the provisions, fulfilling their obligations to meet international freedom of expression standards, as well as the standards set by the Kenya Constitution itself.

The section provides as follows:

A person who by means of a licensed telecommunication system-
a. sends a message or other matter that is grossly offensive or of an indecent, obscene or menacing character; or
b. sends a message that he knows to be false for purpose of causing annoyance, inconvenience or needless anxiety to another person, commits an offence and shall be liable on conviction to a fine not exceeding fifty thousand shillings, or to imprisonment for a term not exceeding three months, or to both.
Read the full judgment here.
Please contact the ARTICLE 19 Eastern Africa Office for more information or interviews:
[email protected]
+254 727 862 230
This website uses cookies to improve your experience. We'll assume you're ok with this, but you can opt-out if you wish. Cookie settingsACCEPTPrivacy and Cookie Policy
Privacy & Cookies Policy