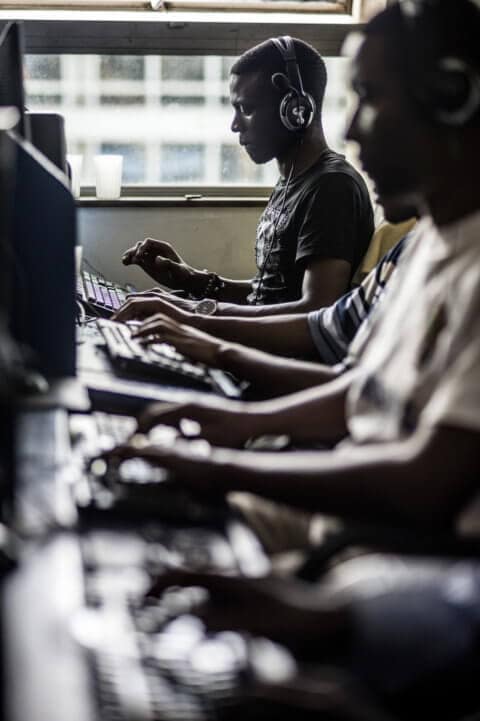 Employees at Daproim, a data processing company which is partnered with Samasource.

ARTICLE 19 regrets that the Computer and Cybercrimes Act, passed into law on 16 May 2018, lacks critical amendments to the draft bill needed to protect the right to freedom of expression and information online in Kenya. Although it contains several important provisions, which are in line with international standards, some of the provisions of the Act particularly relating to content violate international human rights law on freedom of expression. ARTICLE 19 urges the government to review these provisions and amend them in line with human rights standards.

Among a range of worryingly broad provisions which lack public interest defences, clear intent requirements, and impose excessive liabilities on service providers, among other issues, Sections 22 and 23 of the Computer and Cybercrimes Act also establish a worrying ‘false information’ offence. The provisions criminalise ‘publishing false, misleading or fictitious data or misinformation with intent that the data shall be considered or acted upon as authentic’; and ‘publishing information that is false in print, broadcast, data or over a computer system, that is calculated or results in panic, chaos, or violence among citizens of the Republic, or which is likely to discredit the reputation or others’. These ill-defined restrictions have sanctions of up to a 5 million Kenya shillings fine (GBP 36,899) and/or up to 10 years in prison.

“Laws criminalising ‘false news’ are extremely problematic and are frequently subject to abuse by the authorities due to the power they give the authorities to determine ‘truth’. Kenyan courts have found that criminal laws which do not state explicitly and definitely what conduct is punishable are void for vagueness, which is a clear issue with these provisions.” said Henry Maina, Director of ARTICLE 19 Eastern Africa.

ARTICLE 19 warns that enacting a legal duty of “truth” would create a powerful instrument enabling authorities to control journalistic activities and free expression online. Under such laws, journalists, bloggers, whistle-blowers or human rights defenders could be sent to prison on accusations of disseminating ‘untrue’ statements about alleged wrongdoings by the government.

ARTICLE 19 Eastern Africa is also concerned that these provisions are an attempt to reintroduce criminal defamation in a new form. This offence was declared unconstitutional by the High Court in February 2017 in the case of Jacqueline Okuta & another v Attorney General & 2 others[1]. The Court stated that criminalising speech to protect the reputations of others is an unjustified and disproportionate limitation to freedom of expression under the constitution and Kenya’s international law obligations, and that civil defamation was a less restrictive and more proportionate measure.

The passage of the Computer and Cybercrimes Act in its current form is likely to have a chilling effect on freedom of expression and press freedom in Kenya, by creating harsh penalties for vaguely worded restrictions on expression, particularly online and through technology.

ARTICLE 19 acknowledges the government’s consultations, which we have been engaged in since the development of the Act in 2015, but we regret the failure of the government to take on board serious concerns regarding the right to freedom of expression, highlighted in our analysis of the draft law. We call upon the government to review the Computer and Cybercrimes Act, and revise it to bring it into conformity with the constitution and international human rights standards regarding freedom of expression.