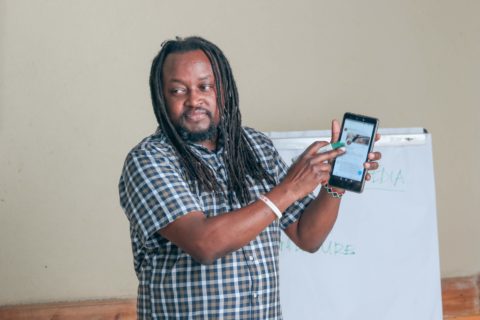 Kiama, an activist, was arrested by 5 police officers during odd hours of the evening on 6 April for publishing infographics and joining the #IMFStopLoaningKenya conversation on Twitter. On 7 April, the DCI filed a miscellaneous application to detain Kiama for 14 days pending investigations on alleged contravention of Section 22 of the Computer Misuse and Cybercrimes Act of 2018. Kiama spent another night in detention at the Central Police Station awaiting the ruling on the application which was set for 8 April 2019.

Today morning, the Court dismissed the application to detain him, however, in an unclear turn of events, the court proceeded to issue punitive orders which violate Kiama’s right to free speech and freedom of association and online assembly. The Court directed that Kiama’s social media accounts be blocked, and barred him from expressing himself on matters relating to COVID-19 loans.

The court also directed that Kiama appears before the investigating officer at the Department of Criminal Investigations every day until 18 April 2021, and slapped a punitive KES.500, 000 (USD 4,575) cash bail, despite there being no formal charges levied on Kiama. The matter will be heard on 20 April. It is noteworthy that Kiama is still being detained at the Central police station due to his inability to raise the inordinately set cash bail.

This is the second time, within 10 months, that Kiama is being targeted and arbitrarily detained for his social media activism and expressing himself on political, social accountability, transparency and economic rights issues. It is also the second time that Kiama has been threatened with charges under Section 22 of the Computer Misuse and Cybercrimes Act, 2018, a notoriously problematic provision which grants authorities disproportionate powers to stifle legitimate expression.

“State-sanctioned intimidation and harassment of activists who use online and offline tools and platforms to protest and express themselves, using creative and artistic tools, on social and political issues must become a knee-jerk reaction of the past. The State is attempting to water down the sanctity of the right to protest and the right to freedom of political expression, but their primacy in the Constitution cannot be shifted,” said Mugambi Kiai, Regional Director at ARTICLE 19 Eastern Africa.

“The President of Kenya must acknowledge and respond to the concerns of people residing in Kenya, including concerns over the use and management of COVID-19 pandemic resources. Under international law, public officials must tolerate a greater degree of criticism from the public compared to ordinary citizens. The government must take proactive steps to ensure transparency and accountability in governance and general state affairs,” continued Mugambi Kiai.
“The constitution guarantees every Kenyan the right to express themself on issues affecting them, including the right to contribute and criticise the government on policy and governance issues. The court order gagging Mutemi from commenting on Kenyan loan sustainability is an unjustifiable limitation to free expression, public participation and online protest,” said Irungu Houghton, Amnesty Kenya Executive Director.
“Since the onset of the COVID 19 pandemic in the country, we have witnessed deliberate efforts to curtail the work of human rights defenders and whistleblowers, especially bloggers, in the country. This, coupled with punitive cash bail and bond terms, seems to be gagging the work of human rights defenders in the country. It is extremely concerning that the judiciary is embracing judicial tyranny as it seems to be an accomplice in this regression when the magistrate in the Kiama case reasoned that the respondent should report daily at the police station to assist the police investigations. This should never be the case in an open and democratic society,” said Kamau Ngugi, Defenders Coalition Executive Director

ARTICLE 19 Eastern Africa, Amnesty Kenya and Defenders Coalition call on the Kenyan government, and the President directly, to ensure that Kiama is immediately released from detention, and any proposed charges restricting his ability to contribute to public discourse are dropped. Moreover, the Judiciary should desist from being used as a tool to stifle freedoms and human rights.