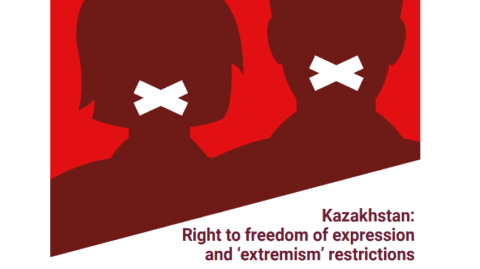 In this report, ARTICLE 19 and the Legal Media Center examine the most important elements of Kazakhstan’s legislative restrictions on freedom of expression designed to address ‘extremism’ and their implementation in practice. Most of the ‘extremism’ provisions analysed in this report are ‘hate speech’ provisions, although Kazakhstani law does not use this term. This report finds that the relevant legislation is not compatible with the country’s obligations under international human rights standards. ARTICLE 19
and the Legal Media Center note that not only does it fail to meet international freedom of expression standards, the domestic legislation is applied in a way that could quell any political dissent and activism, thus becoming an instrument of state control and censorship.

The report finds that the cited legislation employs a very vague and broad concept of ‘extremism’ which leads to overapplication and interpretation. The legislation also includes:

– Far-reaching negative consequences for individuals found guilty of committing ‘hate speech’ in addition to penalties imposed on them under the criminal law (by virtue of placing such individuals on the list of sponsors of terrorism and extremism);

– Prohibition/termination of organisations that have been found responsible for disseminating proscribed “extremist” content;

– Removal of proscribed content from circulation by virtue of listing it as “extremist material”;

– Suspension of entire communication networks and websites to cut off access to “extremist” content (under the Law on Communications).

Without endorsing the misconstrued understanding of the concept of ‘extremism’ in Kazakhstan, the report analyses the relevant national legislation to assess whether it complies with international freedom of expression standards. Moreover, the report addresses the problematic jurisprudential practices through various case studies. This includes over-reliance on expert opinion in the form of linguistic expert assessments, not considering the potential conflict of interests of freedom of expression and, focusing only on the language of the statement not the intent of the speaker.

ARTICLE 19 and the Legal Media Center urge the Government to bring the relevant legislation and practices in compliance with the country’s international human rights obligations. Compliance with international standards will still enable the legislation to achieve its purpose which is to reduce ‘hate speech’ and counter incitement to violence and hatred.

– All legal restrictions on freedom of expression should be compliant with the requirements of legality (i.e. they must be sufficiently clear and precise), necessity (i.e. they must be necessary to achieve one of the legitimate aims of limiting freedom of expression under international law, such as protecting the rights of others), and proportionality (i.e. a particular restriction can be imposed only if a less restrictive
alternative is not sufficient). All legal restrictions on incitement should be formulated with reference to the six-factor test set out in the Rabat Plan of Action.

– Restrictions imposed on freedom of expression under Articles 5, 20 and 39 of the Constitution should be reviewed to ensure that they only allow limiting expression that amounts to incitement to discrimination, hostility or violence on the basis of internationally recognised protected characteristics. In particular, restriction of expression on the basis of inciting “social strife” (and the implied protected
characteristic of belonging to a social group) should be completely removed due to its inherent lack of clearly defined boundaries;

– The definitions contained in Article 174 of the Criminal Code should be substantially revised to make it clear that this provision applies only to speech that amounts to incitement to discrimination, hostility or violence – which in turn requires the proof of intent to cause discrimination, hostility or violence. The category of expression “insulting the national honour and dignity or the religious feelings of individuals”
should be removed altogether;

– Closures of organisations and media outlets (including blocking entire websites) should be permitted only as a last resort in the most exceptional circumstances. Less restrictive alternatives should be envisaged for media, such as self-regulatory complaint mechanisms;

– The courts should interpret and apply all legal provisions restricting ‘extremism’ and ‘hate speech’ in a manner consistent with the requirements of international human rights law, in particular, Article 19 para 3 and Article 20 para 2 of the ICCPR (as interpreted in the Rabat Plan of Action). This involves interpreting the current definitions of prohibited ‘hate speech’ narrowly, so that, wherever possible, they are narrowed down to advocacy of hatred amounting to incitement (подстрекательство) to discrimination, hostility or violence;

– In determining if a particular statement falls under a prohibited category, analysis should never be limited to the language of that statement. The courts and law enforcement authorities in charge of investigating ‘extremism’ and ‘hate speech’ cases should always establish the speaker’s intent to cause prohibited consequences. Furthermore, they should always consider the likelihood of harm to be caused by the statement – and, to that end, the context in which it was made, its extent and magnitude, and the speaker’s position and their authority or influence over their audience;

– The courts and law-enforcement authorities should minimise their reliance on expert assessments in ‘extremism’ and ‘hate speech’ cases. They should only seek expert opinion when specialist knowledge is truly needed to interpret or assess particular evidence. The courts should never substitute their own assessment for the analysis performed by experts;

– Blocking of websites should only be authorised by an independent and impartial court with related procedural safeguards under the rule of law. Any order to block access to content should be limited in scope and strictly proportionate to the legitimate aim pursued. In the interim, we also recommend that law enforcement authorities should not exercise their powers to suspend access to websites, communication services and networks and other measures granted to them under the Communications Law;

– Judges, law-enforcement officials and other relevant officials (e.g. those involved in media regulation) should be provided with comprehensive and regular training on international human rights standards and comparative good practices, in particular those relating to ‘hate speech’ and national security;

– In collaboration with experts and civil society, law enforcement authorities should develop investigative guidelines on the prosecution of ‘extremism’ and ‘hate speech’ cases in line with international human rights standards;

– The relevant executive authorities should exercise self-restraint in the use of restrictive measures at their disposal. In particular, they should seek the liquidation/banning of not-for-profit and media organisations only in the most serious cases of repeated violation of ‘extremism’ and ‘hate speech’ law restrictions and after all other less restrictive interventions at their disposal have proven to be insufficient.

Read the Report in English

Read the Report in Kazakh