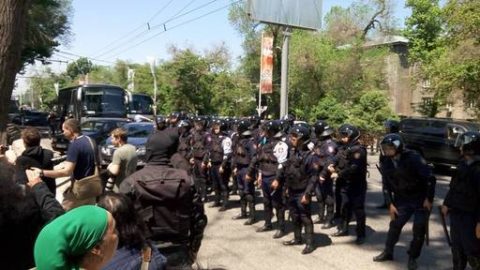 ARTICLE 19 strongly condemns the Kazakh authorities’ detention of at least 370 peace protesters in nine cities of Kazakhstan on 21 May 2016, as well as the harassment and arrest of journalists covering the protests. The government dispersed all nine protests, in some cases using force, and also blocked access to social media and independent news sites over the weekend.

“The Kazakh authorities’ aggressive detention of peaceful protesters is an unacceptable violation of the rights to freedom of expression and peaceful assembly”, said Katie Morris, head of the Europe and Central Asia Programme at ARTICLE 19. “The Kazakh authorities must immediately release all those wrongfully detained, and ensure that conditions are in place to enable all people to express legitimate criticism of government policies. This includes ensuring the free flow of information regarding the protests, by allowing journalists to cover events”, she added.

Government and non-official sources differ regarding the number of protesters and people detained; however, activists present at the protests in Almaty, estimate that at least 200 people were detained on administrative charges of violating peaceful assembly procedure and attempts to organise illegal gatherings. Kazakh legislation on the organisation of protests undermines international standards protecting the right to peaceful assembly.

Almaty also saw the largest number of protesters, with various unofficial sources estimating the turnout to be approximately 3000 people. The Committee of Administrative Police has claimed that the number of protesters did not exceed 20-30 people; however, this figure does not seem credible given estimates that at least 200 people were detained.

To date, the government has not released information concerning the number of protesters and detainees in Astana and other cities; however, according to unofficial information, at least 170 people were detained while peacefully protesting in Astana, Atyrau, Kostanai, Karganda, Shymkent, Aktobe, Pavlodar and Uralsk.

Censorship of information about the protests

At least two journalists were obliged to pay administrative fines for covering the protests. In Almaty, Rysbek Sarsenbayuly, a journalist with the opposition newspaper Zhas Alash, was fined 42, 000 KZT (approx. 125 USD) on charges of violating public order; while in Uralsk, Tamara Yeslyamova, chief editor of one of a few independent newspapers, Uralskaya Nedelya, was detained for seven hours and fined 106,000 KZT (approx. 315 USD) for violating legislation on the procedure for organizing and holding peaceful assembly.

“The government must immediately unblock all websites censored with regard to the protests”, said Katie Morris. She added: “A restriction as severe as website blocking is only legitimate if authorised by a court or similarly independent and impartial body, consistent with the guarantees of a fair trial under international law. This not the case in Kazakhstan, where the government imposed blanket bans on sites covering the protests, in a bid to prevent information about them circulating.”

Restricting the free flow of information during protests violates the rights to freedom of expression and a peaceful assembly – both of which Kazakhstan is committed to upholding as a signatory of the International Covenant on Civil and Political Rights.  States must ensure allow and actively facilitate reporting on and the independent monitoring of protests by all media and independent observers, and refrain from detaining journalists or obstructing their work.

ARTICLE 19 has previously criticised Kazakhstan for its extremely restrictive legislation governing protests, which establishes a system of prior authorisation for organising protests, in violation of international standards. This allows the authorities to prevent legitimate protests that they deem to be harmful to their interests, from going ahead by labelling them as unsanctioned.

During the week leading up to 21 May, at least 22 activists were detained on various administrative charges, ranging from “violations of the procedure for organizing and holding peaceful assemblies” to “petty crime.” The arrests occurred after activists signalled their intent to participate in the protests – either by submitting applications  to hold protests on 21 May to municipal authorities (all of which were denied); or by expressing their support for the protests on social media sites. Other activists and civil society groups have reported harassment, including searches of their offices.

Several have received custodial sentences, ranging from 10 days to two months. Under Kazakh law, administrative arrest may be imposed for violations of the administrative code; following a quick trial, the defendant may receive a custodial sentence and is then held in a temporary detention centre. On 18 May Zhanat Yesentayev, a member of the Public Association Abyroy, was arrested on charges of “incitement to national hatred” under Article 174 of the Criminal Code of Kazakhstan. The charges stem from messages that Yesentayev allegedly disseminated through WhatsApp, stating that they were preparing weapons and alcoholic beverages for protesters.

ARTICLE 19 condemns this crack down on peaceful protesters and reminds the government of Kazakhstan of its obligations under the International Covenant on Civil and Political Rights to ensure the right to freedom of expression and right to peaceful assembly. The government must immediately release all those unjustly arrested and ensure that those wishing to protest are able to do so safely. It must also ensure that police involved in violently detaining protesters are held to account; and should reviews its restrictive legislation governing peaceful assemblies.

Photograph was taken by Zhanna Baitelova.