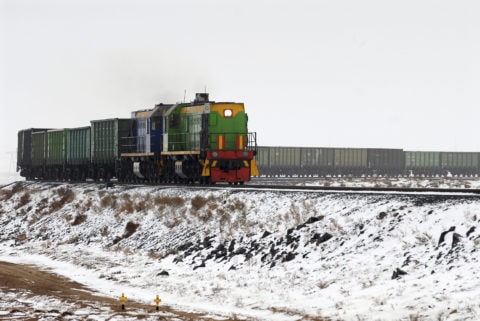 A goods train travelling the frozen landscape beside the Caspian Sea.

ARTICLE 19 calls on the government of Kazakhstan to immediately cease the persecution of individuals expressing their intention to peacefully protest new land reform legislation, and to release all those already arrested in connection with this.

“Peaceful protests are integral to democracy, with the potential to inspire social change and enhance the protection of human rights,” said Katie Morris, Head of the Europe and Central Asia Programme at ARTICLE 19.

“As Kazakhs across the country legitimately seek to express their discontent at proposed land reforms, the authorities are arresting people who have not yet committed any action, not least a crime, in a bid to prevent them from exercising their rights to peaceful assembly and expression,” she added.

Following protests against proposed land reform in several cities in Kazakhstan in April and early May, the Kazakh authorities have launched a nationwide wave of arrests of activists who had expressed their intent to participate in further mass protests scheduled for 21 May 2016.

Since 16 May, at least 22 activists have been detained on various administrative and criminal charges, ranging from “violations of the procedure for organizing and holding peaceful assemblies” to “petty crime” and “incitement to hatred”. Several have received custodial sentences, ranging from 10 days to two months. Under Kazakh law, administrative arrest may be imposed for violations of the administrative code; following a quick trial, the defendant may receive a custodial sentence and is then held in a temporary detention centre.

Among those arrested are:

The arrests occurred after activists signaled their intent to participate in the protests – either by submitting applications  to hold protests on 21 May to municipal authorities (all of which were denied); or by expressing their support for the protests on social media sites. Other activists and civil society groups have reported harassment, including searches of their offices.

Participation in a protest must never be the basis for suspicion of criminal activity; and any preventative arrests must be based on a reasonable suspicion that a criminal offence is planned. This is clearly not the case with regard to recent protests in Kazakhstan.

The protests are against amendments to the land code, which increase the term in which foreigners can rent state-owned agricultural land from 10 to 25 years. The amendments were signed into law in November 2015 and would have been effective from 1 July 2016; however, following the first round of protests, the President imposed a moratorium, postponing the implementation of the amendments until 2017, in a rare moment of acquiescence to public opinion.

Kazakhstan has extremely restrictive legislation regarding the organisation of peaceful protests. The Criminal Code contains a concept of “an illegal public event” as well as an “an illegal assembly, rally, march, picket, demonstration”. All these activities, if illegal, may be punished by a fine (in the amount of 300 monthly calculated indices), correctional labour, public work, or imprisonment for up to 75 days.

The law “on the organization and conduction of peaceful assemblies, rallies, marches, pickets and demonstrations in the Republic of Kazakhstan” (the Peaceful Assembly Law) outlines the circumstances under which local executive bodies can determine an event to be illegal and request its termination.

The Peaceful Assembly Law establishes a regime of prior authorisation for conducting assemblies, as opposed to a system of notification. Article 8 provides that an assembly that is not authorised can be terminated.

The Peaceful Assembly Law also grants unlimited powers to local executive bodies to decide on the time and place of assemblies. Article 4 stipulates that an assembly must be terminated where participants do not comply with the time and place conditions that the authorities have imposed.

The Criminal Code and the Peaceful Assembly law violate international standards on the rights to freedom of expression and peaceful assembly, which offer high protections for non-violent protest.

ARTICLE 19 reminds the government of Kazakhstan of its obligations under the International Covenant on Civil and Political Rights to ensure the right to freedom of expression and right to peaceful assembly. The government must immediately release all those unjustly arrested and ensure that those wishing to protest are able to do so safely.