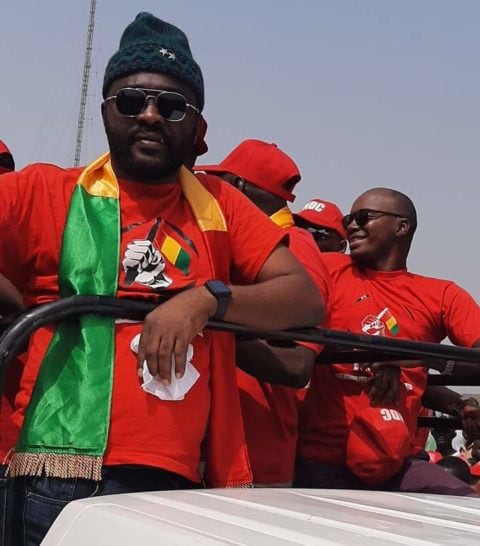 ARTICLE 19, Tournons la Page (TLP) – Guinée, and Organisation Guinéenne de défense des Droits de l’​Homme et du Citoyen (OGDH) call on the Guinean authorities to protect  freedom of expression and the right to assembly and to put an end to the arrest, detention and prosecution of individuals for expressing their opinions. The organisations take this opportunity to express their deep concern about the use of the judicial harassment to silence pro-democracy and human rights activists and journalists in Guinea.

On 10 June, 2021, the activist Oumar Sylla, also known as Foniké Menguè, head of mobilization at the National Front for the Defence of the Constitution (FNDC) and Deputy Coordinator of the citizen movement TLP – Guinea, was sentenced to three years in prison for “communication and disclosure of false information, threats of violence or death”. His conviction followed a strange twist in events in which the authorities combined two cases against him, one of which appeared to have previously been dropped.

The first case related to his arrest on 17 April, 2020, after he participated in the program “Les Grandes Gueules” on Radio Espace FM, where he denounced the arbitrary arrests and abuses that took place in the city of N’Zérékoré on 22 March, 2020 during the constitutional referendum and legislative elections. On 24 April 2021, he was charged with “disseminating false information” and held in pre-trial detention for four months. The charges against him were dropped by during the first court hearing on 20 August. On the same day, the prosecutor appealed the decision to drop the charges and the authorities reportedly continued to arbitrarily detain him in prison until 27 August.

On 29 September 2020, Foniké was arrested by men in civilian clothes in the streets of Matoto in Conakry as he was about to participate in a demonstration organised by the FNDC to protest against the candidacy of President Alpha Condé for a third term. The men who carried out the arrest did not have an arrest warrant, On 21 January 2021, Foniké was convicted and sentenced to 11 months in prison at the court of Mafanco for “participation in an assembly likely to disturb public order “. His lawyers appealed the decision. Both cases came before the Court of Appeal in May and the president of the court joined the proceedings on 3 June 2021, bringing a single charge of communication and disclosure of false information. Despite reports that the prosecutor had requested two years in prison and a fine of 20,000,000 Guinean francs (1,653 euros), the court sentenced him to three years in prison.

The cases of Amadou Diouldé Diallo and Alpha Diallo

On 19 May 2021, journalist Amadou Diouldé Diallo of Radio Télévision Guinéenne (RTG) was released after nearly three months in detention. He had been arrested on 27 February 2021 following his comments on the closure of Guinea’s land borders with neighbouring countries shortly before the controversial October 2020 election. He reportedly made the statements on a radio program called “oeil de lynx” on 21 January 2021. He was charged with “offending the head of state” on 1 March 2021, convicted and sentenced to pay a fine of 5 million Guinean francs (415 euros) in the first trial on 19 May.

On 2 June 2021, journalist and blogger Alpha Diallo was arrested and detained at a police station in Sinfonia/Conakry following a road-check while he was on duty returning from a field investigation. Although Diallo provided proof that he was a member of the media and for his mission order, he was beaten and assaulted during his arrest. He was released after one day in custody, but he was arraigned before a judge for contempt of a state officer. On 15 June 2021, he was sentenced to a fine of 500,000 Guinean francs (41, 49 Euros). Alpha Diallo is a critical voice in Guinea and has repeatedly denounced internet shutdowns during elections and protests.

In violation of international law

The decisions taken by the court against activists and journalists lack impartiality and are disproportionate. Under international human rights law, all legislation restricting the right to freedom of expression must meet the test of legality, necessity, and proportionality. This requires that the limitation must be: provided for by law, in pursuit of a legitimate aim, and be necessary in a democratic society. In addition, the Declaration of principles on Freedom of Expression and access to information in Africa 2019 states that public figures must tolerate a greater degree of criticism than ordinary citizens and sanctions should never be so severe as to interfere with the exercise of the right to freedom of expression. It further requires states to repeal laws that criminalise sedition, insult and the publication of false news.

The false information provisions in the laws are often vaguely defined in their scope, which means that authorities could interpret them as giving them the discretionary power to restrict a wide range of speech, and some appear to pursue objectives that would not be considered ‘legitimate’ under international human rights standards. Bans and other legal restrictions on the sharing of ‘false information’ are open to abuse and can have a devastating impact on political discourse. Freedom of expression and protest is guaranteed by Guinea’s constitution, as well as by international standards, so the authorities must neither stifle these freedoms nor intimidate activists and journalists for speaking out on matters related to the presidential election, and justice must be based on the principles of democracy and be impartial and objective.

In October 2019, Guinea experienced high tensions following the announcement of a constitutional revision that allowed the president of the republic to run for a third term. Demonstrations organised to contest the decision were violently repressed, with several deaths and arrests of opponents and demonstrators were recorded throughout the election period. Some activists and opponents were arrested without warrant on 6 March 2020 before the election and  after the election in mid-December. In addition, the authorities reportedly targeted those suspected of protesting and arbitrarily arrested and detained them for several weeks, often without a warrant, without charge and without access to their lawyers, or family. Many spent months without being brought before a judge. ARTICLE 19, Amnesty International and other human rights organizations repeatedly denounced the attacks on freedom of expression, the harsh conditions of detention, which resulted in at least four deaths, including three Union of Democratic Forces of Guinea activists. This prompted the international community to urge authorities to investigate the violence and bring the perpetrators to justice. In February 2021, the High Commissioner for Human Rights, Michelle Bachelet, stated, “The arrest and detention of opposition members and civil society activists on false charges of undermining the internal security of the State, in the context of last year’s presidential elections, seriously undermines the foundations of democratic governance,” and further urged the authorities to “release all those detained for exercising their rights to freedom of expression, peaceful assembly and participation, and to ensure fair trials for those accused of criminal offenses”.

The government eventually responded by releasing detainees, and taking some of them to court. To date, it is difficult to obtain figures on the status of those arrested and released in connection with the presidential election.

Authorities must urgently provide a full report and share the information with the nation and the international community. They must also ensure respect for human rights, cease all judicial harassment, threats and intimidation against opponents and activists.

Civil society organisations call on the authorities to:

– Immediately and unconditionally release Oumar Sylla, arrested for exercising his right to freedom of expression

– Repeal all criminal sanctions that criminalise publication of false news, insults and offending the head of state in accordance with international standards.

Souleymane Bah, President of the Guinean Organization for the Defense of Human and Citizen Rights