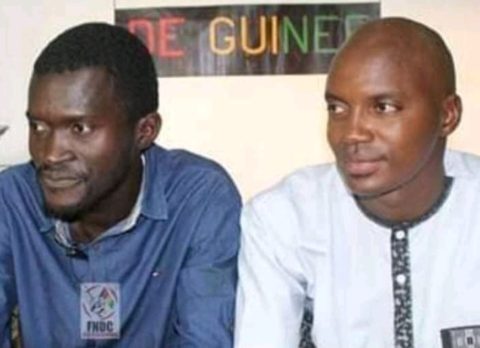 Activists Koundouno Sekou and Ibrahima Diallo, who were arrested on March 6, 2020

ARTICLE 19 is deeply concerned about the state of freedom of expression and the right to protest in Guinea following the banning of a peaceful demonstration against the draft constitutional referendum, the beating and expulsion of journalist Thomas Dietrich, and the arrest of two civil society activists, Koundouno Sekou and Ibrahima Diallo, members of the National Front for the Defence of the Constitution (FNDC).

“We call for the immediate release of Koundouno Sekou and Ibrahima Diallo, and all those detained for expressing their opinions and exercising their right to freedom of expression.  The rights to access information, express an opinion and to protest are fundamental rights, which should be protected in Guinea.

“We also call on the Government to ensure the safety of journalists, who play a crucial role in providing the public with information and holding the government to account.”

On March 4, the Guinea authorities banned a peaceful demonstration against the draft constitutional revision, organized by the FNDC that was due to take place the next day.  This was in violation of Guinea’s own 2010 Constitution in Article 10 which states that: “All citizens have the right to demonstrate and march”.  Demonstrations play an essential role in the political, economic, civil and social life of any society and are a guarantee of democratic openness. Any restrictions should be legal, proportionate and necessary to ensure there is no violation of the right to demonstrate.

On March 5, Thomas Dietrich, a French journalist at Le Media, was brutally beaten while covering the banned FNDC demonstration. He was reportedly intimidated and threatened with death by members of the security forces for filming them beating a demonstrator. The day after the demonstration, Dietrich’s accreditation was cancelled and he was arrested and expelled from Guinea. According to Guinea’s High Authority for Communication (HAC), Dietrich’s reporting permit was cancelled for overstepping the terms of his authorization.

Fatou Senghore added: “ARTICLE 19 condemns this blatant intimidation of a journalist, which is also an attack on freedom of expression, freedom of the media and citizens’ right to information. States have a duty to prevent, protect and remedy all forms of violence against journalists, activists and human rights defenders. Guinea must abide by its commitments and key human rights standards.”

Arrests of FNDC members without warrant or notification

At around 7pm on March 6, FNDC members, Koundouno Sekou and Ibrahima Diallo,  were arrested at Diallo’s home. Relatives report that about twenty hooded and armed police officers, of the Search and Arrest Brigade burst into Diallo’s home. The two men were reportedly brutalized and taken to an unknown location.  The family’s relatives did not hear from them until the day after their arrest. According to the most recent reports, they were taken to the Public Prosecutor’s Office of the Court of First Instance of Mafanco on Monday, 9 March 2020, and will be prosecuted for offences against officials, and for the production, dissemination and disclosure of data likely to disturb public order and public security or to violate human dignity.

Fatou Senghore said: “Guinea has an obligation to create an open civic space to all its citizens. We demand justice for the victims of state repression and call for an end to the impunity that is the root cause of these serious violations.”

The crackdown on protests against the constitutional referendum over the past five months has resulted in dozens of deaths and hundreds of people arrested, according to media reports.

Read this press release in French.