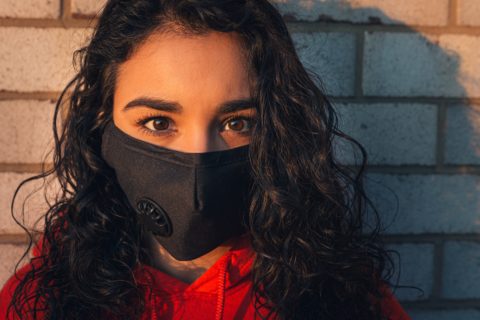 As part of efforts to help to slow the transmission of the Coronavirus, we have seen in many countries in the world a move towards making the wearing of face masks compulsory, particularly on public transport. In some countries, these new rules clash with existing laws which ban the wearing of face coverings.

Muslim women in France and Belgium now find themselves in the absurd situation of having to wear a face covering while also being banned from doing so. Under the new rules imposed in France, wearing face masks or coverings is now legally required on public transportation, schools, and when entering certain shops. Not observing these rules means that individuals risk a €135 fine.

When in 2010 France passed a law prohibiting people from wearing clothing which conceals the face in public, they allowed one exception to that rule based on health reasons. Not observing this law was punishable with a €150 fine and a compulsory course on citizenship. Although drafted in neutral language, the law was passed during a period of political hostility to traditional and religious dress codes associated with some Muslim communities, and increasing Islamophobia. And in France from 2011-2017, nearly 2,000 Muslim women were stopped under this law for wearing veils, which led to 1,830 fines and 145 warnings.

The 2011 Belgian law against face coverings is similar to the French ban but does not recognise any public health exception. Belgian authorities have been selectively enforcing the 2011 law and have not sanctioned those wearing facemasks due to Coronavirus, because masks are now required in public transportation and certain municipalities. However, as soon as an individual leaves those zones, it is legally forbidden to wear any kind of face covering. So as soon as someone steps out of a tram or the airport, they could technically be fined for failing to remove their mask/scarf. The authorities are therefore granted significant – and troubling – discretion to determine the subjective reason for wearing face coverings.

Face covering bans also exist in a number of other countries, including Austria, Bulgaria, Denmark, the Netherlands, parts of Switzerland and Quebec, Canada, although these countries have yet to mandate the wearing of masks or face coverings to reduce the spread of the Coronavirus.

Veils as an expressive act and a manifestation of religious belief

The UN Human Rights Committee found that the French ban on face covering is neither necessary nor proportionate from the perspective of maintaining national security or for attaining the goal of “living together” in society.

However, the European Court of Human Rights (ECtHR) upheld the ban in SAS v France, affording the Government significant leeway to determine what it needs to do to ensure public safety and social cohesion. The ECtHR again recognised that minority rights may be restricted in the name of ‘living together’ as part of the cases of Dakir v Belgium and Belcacemi and Oussar v Belgium in 2017, which upheld the Belgian ban on veils.

ARTICLE 19, which intervened in the French case, agreed with the dissenting view that advancing the aim of “living together” is an insufficiently specific basis for restricting fundamental rights, including the right to freedom of expression. If this logic is extended, minority viewpoints could easily be censored to remove controversial expression from public view.

In 2013, a study by Open Society Justice Initiative concluded that the face covering ban did not reduce the already limited number of women wearing headscarves, but rather restricted their movement. Bans are also correlated with increased anti-Muslim sentiment and have a disproportionate impact on Black, Asian and minority ethnic (BAME) communities. Not only do these laws have a negative impact on the lives and right to free expression of those impacted, but policy and public statements supporting them have led to increased discriminatory attacks.1For example, in August 2019, Boris Johnson, the UK’s Prime Minister, compared Muslim women wearing full-face veils to “letter boxes” and “bank robbers.” Within the three weeks following his speech, it was reported that Islamophobic incidents targeting Muslims in the UK rose by 375%.

ARTICLE 19 believes that bans on full-face coverings are neither necessary nor proportionate and violate women’s rights to freedom of expression and religion. The wearing of the veil is an expressive act protected by the right to freedom of expression, and any restrictions must be supported by robust evidence. To date, we have yet to see sufficient evidence to prove any positive impact as a result of the face covering ban on issues such as national security or public interest.

The requirement to wear masks as protection against Coronavirus in countries with these bans only further exposes their discriminatory nature. There is no official requirement on the type of masks to be worn to prevent the spread of COVID-19, and many wear homemade fabric masks or simply use scarves, which often resemble the headscarves worn by Muslim women.

This situation has placed many Muslim women in a very challenging position of having to appear to be wearing a face covering for the ‘right reasons’. It has created a bizarre legal situation in which police and courts have to assess the purpose of face coverings to determine if they are mandatory or illegal.

With a long history of police profiling of Muslim communities, these powers to identify the “right” masks and fine the “wrong” coverings set a precedent which is deeply flawed and of great concern. With no definition of what a ‘right’ or ‘wrong’ face covering is meant to be, there is a clear risk of discriminatory implementation.

The Coronavirus pandemic has exposed the deep inequalities that exist in societies across the globe. On the issue of face-covering bans, it has exposed the urgent need to repeal these laws.

Women should have a right to choose how they dress. Any restriction imposed by authorities on the wearing of religious dress should be strictly limited to what is necessary and proportionate in the circumstances, for instance if it is essential to carry out a job.

Countries which have adopted these laws should focus their efforts on combatting racial and religious discrimination, and the promotion of tolerance and equality across all spheres of society.