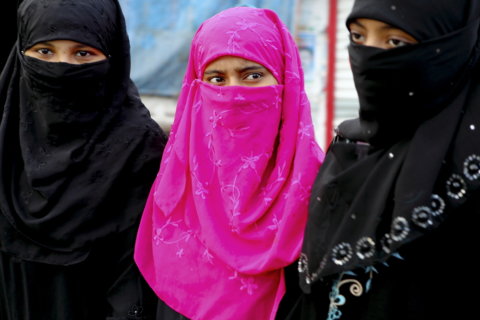 A woman wearing a bright pink niqab stands between two other women dressed in black.

ARTICLE 19 is disappointed with the decision of the Grand Chamber of the European Court of Human Rights in S.A.S. v. France. The ruling sacrifices the expression rights of a minority for the comfort of the majority, setting a worrying precedent for the rights of all people in Europe.

We call on France to repeal the criminal ban on concealing the face in public without delay.

The applicant to the European Court of Human Rights (the European Court), referred to by her initials S.A.S., a French national and practicing Muslim, complained that a criminal ban on wearing clothing that conceals one’s face in public (Law 2010-192) 265, which came into effect in France in April 2011, violated various rights under the European Convention on Human Rights (Convention), including the right to freedom of expression. The penalty for breaking the law is a fine of up to €150 or compulsory citizenship classes.

The ruling by the Grand Chamber is the first in which the European Court has addressed the compatibility of a criminal ban on wearing the full-face veil in any public place with the European Convention on Human Rights.

ARTICLE 19 submitted a third party intervention in the case, arguing that the ban violated the freedom of expression and equality rights of the applicant, relying upon international and comparative law. We argued that the wearing of religious symbols, including the full-face veil, is an expressive act protected by the right to freedom of expression, and as such any restriction must be provided for by law, pursue a legitimate aim, and be necessary in a democratic society. In particular, we argue that such restrictions cannot be justified by speculation or assumptions about their necessity to serve individual or public interests. They must be supported by robust evidence.

In the submission, we cite numerous independent UN experts who have advised that prohibitions on religious dress, including the full-face veil, violate freedom of expression and are counter-productive to the promotion of pluralism and tolerance. Similarly, we note that numerous national legislatures have rejected as discriminatory similar attempts to ban religious dress, and several national courts have limited prescriptive laws on face-coverings that were narrower in scope than the blanket ban in issue in this case.

In its ruling, the Grand Chamber of the European Court held that the prohibition on clothing concealing the face interfered with both Article 8 (the right to respect for private and family life) and Article 9 (freedom of thought, conscience and religion), noting that wearing the full-face veil is “the expression of a cultural identity which contributes to the pluralism that is inherent in a democracy.” However, the European Court ultimately found this interference was justified.

However, in a move characterised as “far-fetched and vague” by two dissenting Judges, the European Court concluded that the ban pursues a legitimate aim in ensuring “living together” through “respect for the minimum requirements of life in society”, premised on the important role the face plays in social interaction. Together with a wide-margin of appreciation for the State on matters relating to religion, the European Court showed deference to the national legislature’s judgment in determining a blanket ban on face coverings as both necessary and proportionate, and therefore compatible with the Convention.

While no violation of the Convention was found, it is important to note that the European Court rejected the French government’s arguments that a ban on the full-face veil can either be said to advance equality for women or respect for the dignity of others.

Although the ruling is both disappointing and problematic in a number of ways, ARTICLE 19 welcomes the dissenting opinion of Judges Nussberger and Jäderblom for attaching much greater weight to freedom of expression arguments in their analysis, questioning how the Court could condition the enjoyment of fundamental individual rights on such vague grounds, and arguing in favour of finding a violation.

We agree with the dissent that advancing the aim of “living together” is an insufficiently specific basis for restricting fundamental rights, including the right to freedom of expression. If this logic is extended, minority viewpoints could easily be censored just to remove from public view controversial expression.

Notably, the dissent observes that the veil does not cause social unease, but rather perceptions of the symbolism behind the veil, not shared by those who chose to wear it, are the cause of this unease. Critically, even if this were not the case, there is still “no right not to be shocked or provoked by different models of cultural or religious identity”, and as such the veil cannot be banned simply to placate the prejudices of the majority. The Convention protects expression that shocks, offends, and disturbs, and a democratic society should accept that diversity rather than suppress it. ARTICLE 19 believes this should have led the European Court to examine the facts specifically under Article 10 of the Convention and to find a violation.

In relation to the broad margin of appreciation afforded to the State, the dissenting opinion outlines why the European Court should have exercised much higher supervision in this case. In line with ARTICLE 19’s submission, the dissent identifies the importance of the rights at stake, and notes only two Council of Europe States have similar bans on facial coverings, with many other States either rejecting analogous legislative measures or restricting them through national Courts. Therefore it is reasonable to conclude there is evidence towards a European consensus on the compatibility between fundamental rights and an absolute ban on the veil. In ARTICLE 19’s view, had the ruling placed grater focus on freedom of expression, a much narrow margin of appreciation would have led to a violation of the Convention being found.

In relation to the proportionality of sanctions, the dissent pointed out that even relatively small criminal fines have a severe accumulative effect on women forced to chose between expressing their religious beliefs and defying the law. In this regard, less intrusive means, such as education programmes to foster greater inclusion, would be much more appropriate than criminal penalties. In particular, ARTICLE 19 points to the Rabat Plan of Action, launched by the UN High Commissioner on Human Rights in 2013, as containing positive guidance in this respect.

ARTICLE 19 reiterates its view that an absolute ban on facial coverings in public violates the right to freedom of expression and guarantees against discrimination under international human rights law.