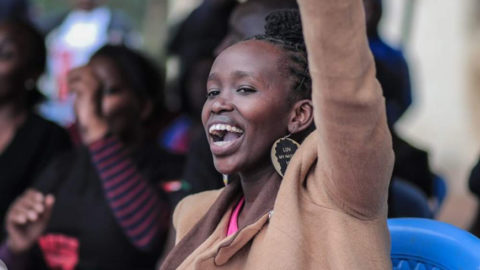 By Winfred Gakki of ARTICLE 19

In Kenya, women continue to be stigmatised. They are vilified when they don’t behave or dress the way certain parts of society expect them to, and they are regularly denied their right to have their voices heard because of their gender. Often this prejudice can result in violence.

For decades, Kenyan women have participated in political activism for change, including during the fight for independence. Women were involved in active combat, and supported the Mau Mau fight for independence. During the dictatorial leadership of former President Daniel Moi, when so many political dissidents were arrested, mothers of political prisoners united to agitate for their release. Kenya also celebrates icons such as the Nobel Peace Prize winner Wangari Mathai, who championed for environmental rights and did not hesitate to protest against government practices and policies that threatened the environment.

In November 2014, thousands of protesters, mostly women, participated in a march in support of a woman who was stripped and assaulted at a matatu stage by a group of men because she was dressed “indecently”. This incident, as well as similar incidents before, led women to initiate a campaign dubbed #MyDressMyChoice, championing women’s right to freely choose how they dressed as part of their overall rights to dignity and security in society.

Four years later, in May 2018, women took to the streets to protest against an administrative decision taken by the management of a local hotel to throw a mother out of the establishment for breastfeeding her child in public.

On 17 February 2021, students from Moi Girls High school held a protest demanding the removal of the school’s principal for alleged corruption and mismanagement, including intimidation of teachers and support staff, power outages, lack of textbooks, poor food standards, and general neglect of student welfare. In December 2020, students from Lugulu Girls High School held a march calling for the school to investigate allegations of the sexual harassment of one of the students by a man at the school. The man’s identity was not revealed.

These incidents brought to the fore the issue of women’s and youth’s activities in public discourse, including driving advocacy against laws, policies and practices that discriminate against women and youth.

Women and young people play a vital role in claiming Kenyan citizens’ rights guaranteed in the constitution, be it women’s rights or matters concerning the state’s governance. However, they often face a challenge in their attempt to exercise their right to protest: deep-rooted stigma. For example, people see protesting youth, and especially university students, as destructive and assume demonstrators are out to loot and cause disruptions. Yet the fight for democracy in Kenya bears the footprint of university students. Likewise, women who protest are seen as “hard-headed” for their “failure” to conform to the patriarchal domestic expectations of them. There are also clear patterns of abuse of abuse of women activists by the security forces.

The role of women and youth in advocating for change in society must be recognized. Their activism to bring about change also combats the stigma surrounding the right to protest. The media also has a role to play: it should make sure that reports on women and youth participation in protests is issue-based so that it does not further perpetuate the negative perception of protest or reinforce people’s marginalisation. Kenya’s government must ensure that women are free to exercise their right to protest and take all measures to guarantee this right, including addressing the gender inequalities so obvious in the very fabric of society.

Read more about protest on our Free to Protest campaign page