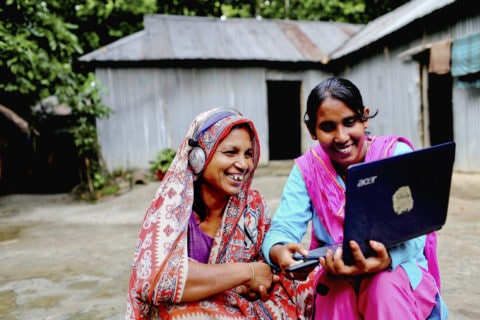 Info Lady Shathi helps 50 year old Kohinur Begum to Skype with a relative. In rural Bangladesh the Info Ladies are bringing internet services to men and women who need information but don't have the means to access the web. After three months of training the Info Ladies set out each day in their pink and blue uniforms to cycle to remote villages where they provide Skype connections to villagers who want to communicate with relatives working overseas. They also provide tech services, photographs, health tests, cosmetics and other small items that can be easily carried.

In a year when the media was repeatedly challenged, criticised and undermined, it’s vital to emphasise information and freedom of expression as forces for public good. At the core of this is media and information literacy, and the coronavirus pandemic — and responses to it, from governments, business, civil society, the media — has made it clear just how important it is.

Media literacy concerns the vital importance of equipping people with the tools to educate, to inform, to engage and to communicate. But it is also about the public having trust in the media, something which has consistently been under threat, not for the first time, and arguably, at a critical time in our history.

“Our times are complex,” says Pierre François Docquir, Head of Media Freedom at ARTICLE 19. “Disinformation — and the abundance of discourse on disinformation — undermines the trust that the public may have in information, which is a threat on the democratic model of society. Dealing with disinformation through law is perilous for freedom of expression. Media literacy, on the other hand, leads to empowerment of individuals by increasing their capacity to critically receive media content and news, thus enabling them to act as informed citizens and  make informed choices in relation to all aspects of life in society.”

ARTICLE 19’s Silvia Choccaro is a co-host of the #Journosafe Flash Talks, organised by the Centre for Freedom of the Media (CFOM) at the University of Sheffield. The flash talks pair civil society with academics to come up with tools and methods for protecting journalists and, as a result, strengthening media literacy and its enhancement of informed debate and, ultimately, decision-making. Choccaro’s talk will focus on a feminist approach to the protection of journalists. Key to this is building support into media outlets and platforms and within peer-to-peer networks. Training is also crucial, including developing guidelines and safety manuals based on best practices and experiences of women journalists and media organisations around the world, keeping in mind that tailoring these guidelines for specific environments may be required. It’s also about enshrining gender equality policies into the media industry.

One of media and information literacy’s key functions is, as ARTICLE 19 has argued before, to “strengthen public’s capacity to critically evaluate media”.. Part of this evaluation is assessing whether media actually represents all parts of the society media is reporting on. So women must be there. LGBTQI people must be part of the media environment. Minority communities — with regard to race, class, religion or any other group of people that does not necessarily make up the largest part of a society but whose voices must be heard — must be present.

During World Press Freedom week, which runs from April 29 until May 3,  ARTICLE 19’s head of Central Asia and Europe Sarah Clarke will also be taking part in an Open Democracy discussion about women journalists, looking at issues they have championed and what have they revealed, reported on and dissected.

The Power of Protest

Literacy also has links with protest. If people are informed, they can respond, and they can take action to make their voices heard — and protest is one of the strategies for doing so. A report published by ARTICLE 19’s regional office in Brazil examines women and protest, emphasising the stark absence of any measures to protect women when they are practising their right to express themselves in civic spaces. Girl, Did You Get Home Safely? looks at women and protest in Argentina, Brazil and Chile, identifying the risks and challenges women protesters face and highlighting “care strategies that activists have developed to mitigate such challenges.” For many women across the world, protest is or has the potential for being the safest way of exercising their right to free expression and their right to put into action what they have read and learned: using their media literacy to effect action.

Protest is just one example of how governments fail to take responsibility to protect citizens’ rights. Governments must be made accountable for protecting media literacy, and we must remind them, our elected officials, of their obligations. We must push them to be clear and transparent on the ways they are strengthening the right to know, an objective which will be the focus of an event hosted by the Media Freedom Coalition (of which ARTICLE 19 is a member).

The pandemic has exposed so much about societies and governments over the last year, and given cruel reminders of how information can be “managed” and often distorted. In Brazil, the United States, Iran, Mexico (to name but a few), governments have refused to acknowledge the extent of the problem, and the enormous threats to life their citizens faced. As India breaks records for COVID-19 cases daily, evidence that only a fraction of cases and deaths have been reported continues to emerge. In Kenya, the government has failed to inform the public about vaccines, while at the same time rolling out harsh restrictions on movement.

Scepticism and hostility toward the media is nothing new: battles have always been fought between people and businesses delivering news, information and opinion and those who want to silence them. Disinformation, though not a new phenomenon, has become the favoured framework for free expression battles. Politicians, political activists, companies (including media companies) and governments may use disinformation to shape public opinion, harness power, and make money. Everyone, including freedom of expression advocates, recognise that combatting disinformation is key to achieving desired results. But how disinformation is defined and identified is crucial.  We have all witnessed powerful people making the charge of “fake news” so as to block information and expose it.

By its very nature, freedom of expression is supported by media literacy, because it helps us to understand  the way citizens consume, use and understand the media, and how media influences their lives. That is why it is  as important as it ever has been to build media literacy into systems of governance, development, and education.