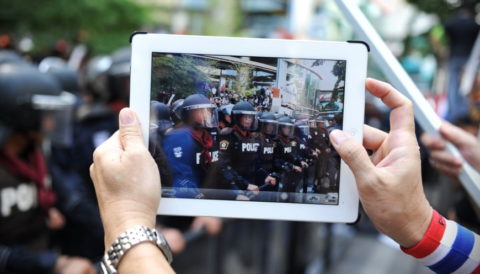 Announcement concerning a paper presented to the Academic Conference on the Safety of Journalists, World Press Freedom Conference, 9 -10 December 2020.

Can Media and Information Literacy (MIL) protect journalists? This is the question the academic paper “Understanding the link between a media and information literate citizenry and the (un)-safety of journalism” seeks to answer.

The authors look at whether MIL societies are more likely to support journalism and protect journalists from attempts to silence them, even kill them. If so, more efforts need to be put to increase MIL when combatting threats to media freedom and violence against journalists.

Written by Silvia Chocarro[1], Jackie Harrison[2], Albana Shala[3] and Sara Torsner[4], this paper opens a new area of academic research that links an increased understanding by the public on the civil role of journalism through MIL to a safer environment for journalists to do their job.

First, the paper looks at the relationship between media and their audiences, analysing whether audiences are predisposed to defend the media they trust and its workers, if under attack. This is, for example, what the Filipino-American journalist Maria Ressa has called “communities of actions”.

Second, it looks at whether a more media and information literate citizenry is further inclined to defend journalism and journalists because of their understanding of the role journalism plays in democratic and participatory societies. This is what we call “pockets of resistance” that could be harnessed to foster media freedom and journalism safety more broadly.

From this perspective, increasing MIL would not only play one of its main functions, which is to strengthen public’s capacity to critically evaluate media, but it would also increase the public’s ability to demand remedial action against predatory powers that seek to attack journalism and journalists. It would also become a tool to formulate counter narratives to those rejecting the value of journalism and the peddling of public mistrust in journalism.

Third, the paper identifies a number of empirical cases of media and journalists under attack that have been defended by the communities they serve or by the society at large through a variety of expressions of support and solidarity. The cases identified are the judicial harassment against American-Filipino Maria Ressa and the media she leads, Rappler; the killing of Ján Kuciak in Slovakia that led to the resignation of the prime minister; the detention of Ivan Golunov, who was freed after four days in prison; the Mexican journalist Carmen Aristegui whose audience defended her when she was fired because of her investigative reporting; and the Huseyn brothers in Azerbaijan whose struggle to expose corruption and abuse was supported through several protests. These cases require further research within this new framework of MIL for the protection of journalists to better understand what makes audiences and society at large to take actions to defend journalism and protect journalists.

The purpose will be to understand whether a strong relationship of trust between media and their audiences and between journalism and media literate communities can serve to protect journalists facing repression and violence.

[1] Dr. Silvia Chocarro is Head of Protection at Article 19 and a member of the Centre for Freedom of the Media at the University of Sheffield

[2] Jackie Harrison is Professor of Public Communication and UNESCO Chair on Media Freedom, Journalism Safety and the Issue of Impunity and the Chair of the Centre for Freedom of the Media at the University of Sheffield

[4] Dr. Sara Torsner is a Research Associate to the UNESCO Chair on Media Freedom, Journalism Safety and the Issue of Impunity, professor Jackie Harrison which is hosted by the Centre for Freedom of the Media at the University of Sheffield