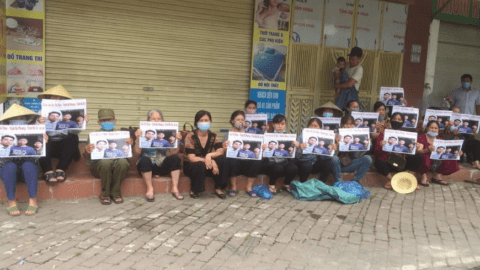 The conviction of a Vietnamese mother and son for their human rights advocacy underscores the ongoing suppression of independent civil society and online expression in Vietnam, said ARTICLE 19. Vietnamese authorities should immediately and unconditionally release Can Thi Theu and Trinh Ba Tu, take steps to protect all human rights defenders, and uphold digital rights and freedom of expression.

“Today’s ruling is yet another dramatic blow to internet freedom in Vietnam,” said Matthew Bugher, ARTICLE 19’s Head of Asia Programme. “With each outrageous conviction of a human rights defender, Vietnam cements its status as one of the top enemies of freedom of expression in the world.”

The Hoa Binh Provincial Court today convicted Can Thi Theu and her son Trinh Ba Tu and sentenced each to eight years’ imprisonment, plus three years’ probation. Both were convicted under Article 117 of Vietnam’s Penal Code, which criminalises ‘making, storing, distributing or disseminating information, documents and items against the Socialist Republic of Vietnam’.

Both mother and son were arrested on 24 June 2020 along with Can Thi Theu’s other son, Trinh Ba Phuong, and fellow rights defender Nguyen Thi Tam. The latter two are still awaiting trial dates. The four were arrested in relation to their online advocacy regarding a 9 January 2020 land grab in Dong Tam in which Le Dinh Kinh, the 84-year-old village leader, was killed in an early morning police raid. The four are among the best-known independent voices on Facebook and YouTube in Vietnam monitoring human rights abuses related to the ongoing land dispute. Before his arrest, Trinh Ba Phuong alone had some 50,000 Facebook followers.

The indictment against Can Thi Theu and Trinh Ba Tu lists eight videos allegedly defaming the Vietnamese Communist Party and spreading false information about Dong Tam that the pair had posted to Facebook. It also mentions the confiscation of several blacklisted books from their homes.

Can Thi Theu and Trinh Ba Tu were active supporters of the Liberal Publishing House, a banned independent publisher which won the International Publishers Association’s 2020 Prix Voltaire award before succumbing to pressure from the authorities. Its co-founder, independent journalist Pham Doan Trang, was arrested in October 2020, also under Article 117 of the Penal Code.

International bodies have repeatedly called on Vietnam to amend its Penal Code to comport with international law. In 2021, four UN Special Rapporteurs stated that Article 117 is ‘overly broad and appears to be aimed at silencing those who seek to exercise their human right to freely express their views and share information with others’.

Early on the morning of 24 June 2020, police detained Can Thi Theu as she was on her way to Trinh Ba Phuong’s home in Hanoi. Police took her to Hoa Binh, some 80 kilometres away. Can Thi Theu was not allowed to meet with her lawyer until 23 March 2021, 272 days after she was arrested, infringing upon her right to timely access to legal counsel.

Around 5am on the same day, Trinh Ba Tu was sleeping at the family’s pomelo farm in Hoa Binh when the police reportedly broke down the door to his home. Authorities confiscated printed material and USB drives containing documents the family had collected as part of their independent human rights documentation, along with several books by Pham Doan Trang. He was not permitted to meet his lawyer until 19 April 2021, 299 days after he was arrested.

Trinh Ba Phuong was likewise arrested in Hanoi early the same morning. Although his wife says he did not resist, he was forcibly restrained and battered before he was taken away. Alarmingly, from 1 to 30 March 2021, Trinh Ba Phuong was involuntarily committed to a psychiatric facility for reportedly being ‘uncooperative’ with police. He has not yet been granted access to a lawyer.

Nguyen Thi Tam was also arrested around 5am on the morning of 24 June while she was on her way to a local market outside of Hanoi. Police reportedly cut the electricity and internet to her housing block after her arrest, before arriving to search her home. At the time of writing, she has still not been allowed to meet with her legal representation.

In November 2020, four UN special procedures expressed their concern about the circumstances of their arrest and detention and the denial of access to their lawyers and family members. They suggested that the arrests were also an attempt to incite fear among women human rights defenders.

No end in sight

According to The 88 Project, a Vietnamese human rights organisation, over 250 individuals are currently imprisoned as a result of their human rights advocacy. Of these individuals, at least 40 have been sentenced under Article 117. This figure does not count those like Trinh Ba Phuong who have been charged but are awaiting trial. A recent report by Amnesty International states that 21 of the 27 prisoners of conscience jailed in Vietnam in 2020 were prosecuted for their online expression.

Vietnam should immediately and unconditionally reverse its judicial harassment of Can Thi Theu and Trinh Ba Tu. It should end its relentless persecution of independent voices and release all those currently detained under abusive provisions in the Penal Code. Moreover, the Penal Code itself must be amended in line with international human rights law. Finally, internet providers and social media platforms must resist pressure from Vietnamese authorities to be accomplices to the country’s human rights abuses.

“The international community should send a clear signal to the government of Vietnam that the ongoing abuse of its Penal Code to intimidate and imprison civil society must end,” said Bugher.