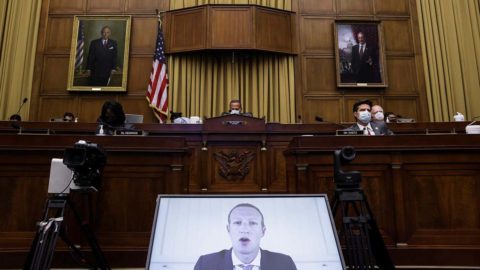 On Wednesday 29 July 2020, chief executives of the “Big Four” tech companies, Amazon, Google, Apple and Facebook, faced over 200 questions from US lawmakers, during a five  hour hearing of the House Judiciary Committee .

The hearing focused on potential violations of antitrust rules, and how these companies’ dominance and huge power impacts individuals’ human rights online. ARTICLE 19 welcomes the US Congress recognition that the huge power and responsibilities of the “Big Four” raises equally huge issues for content moderation and digital surveillance.

We have previously called on lawmakers to consider the vital importance of protecting freedom of expression when looking at ways to moderate the influence of these companies on competition in the market. Their enormous power and influence on freedom of expression and other related rights,  along with their crucial role in markets around the world means that Congress must act now to modernise and properly enforce anti-trust laws and ensure that they are fit for purpose for the digital age.

Specifically, Congress must include a human rights dimension in its assessment of big tech market power and of the anti-competitive effects that can arise from the misuse of this power. In addition, Congress must act to diminish concentration of power in digital markets and lower barriers to entry for competitors, making markets contestable again and supporting the creation of viable alternatives for consumers.

The hearing has been covered extensively in the media but what emerged clearly from the marathon session is that the impact of big tech dominance is not limited to the economic realm, but includes  the  fundamental rights of individuals, their right to free expression, to participate fully in society and to enjoy privacy among many others.

A large number of the questions asked by the lawmakers,  focussed not on pure anti-trust issues, but instead on content moderation, anonymity and surveillance.  This shows how  vital it is that the different regulatory frameworks work in combination  to protect expression.

This requires cooperation and coordinated solutions.  Each time regulators intervene they have to be clear about the specific harm they want to address. Nevertheless, some instruments that address competition harms can and should be used to achieve not only antitrust aims but also wider public objectives;  for example media pluralism and the free flow of information online.

The key issues in the hearing

Four major themes were covered in the hearing which directly relate to freedom of expression. It is informative to look at the approach the lawmakers took to the issues and what could be included in their final report.

For 13 months members of the Committee collected bulk evidence about the four companies’ violation of antitrust rules.

Representative David Cicilline, the chairman of the Antitrust Subcommittee, set the scene by stating that the activities of the four companies are of concern because they each represent bottlenecks for access to markets, to consumers and the free flow of information online.

They also control the digital infrastructure and abuse this control to expand their power, a power which shapes and affects our daily life in almost endless ways.

He also stated that the big four tech companies have too much economic power and with this comes substantial political power too.

This situation poses a huge threat to democratic systems, and what is required is to reshape this balance of powers.

ARTICLE 19 has long warned that excessive market power of digital platforms raises free speech challenges, and that decentralisation of content moderation might be the best way to protect freedom of expression online.

Google and Facebook were questioned about  the ways they moderate content, confirming that antitrust and content moderation issues are currently intrinsically linked: it is impossible to address the challenges raised by content moderation without addressing the market power or the gatekeeping position of these companies.

As Google and Facebook allow people to access information online, the US lawmakers are concerned that they manipulate what their users see and have access to, and in doing so, they interfere with their users’ autonomy, and their opinion and decision making processes.

Lawmakers were particularly concerned about censorship practices, biased decisions on content removal and amplification, as well as how these companies define, identify and manage disinformation.

We have repeatedly  raised these concerns, proposing solutions that platforms can implement either by themselves or with the support of multi-stakeholder fora such as Social Media Councils.To tackle content moderation issues, we have called for platforms’ terms of service and community guidelines to respect international standards on freedom of  expression, and for platforms to improve their dispute resolution processes  and to be transparent about their removal procedures, including the use of algorithms in content moderation and curation. Since algorithms currently have very limited ability to assess context, platforms should at the very least ensure human review of content flagged through these mechanisms.

This control translates to the capacity, on the one hand, to monitor competitors in order to prevent them from becoming a real competitive threat; and, on the other hand, to surveil consumers, which in turn makes it easier to lock them in.

Apart from the more traditional antitrust challenges that derive from the control of infrastructure, Congressmen seemed concerned by the fact that this surveillance business model is not compatible with the protection of consumers’ privacy.

We stress that although privacy is frequently violated in the context of control of these companies over digital infrastructure, surveillance of individuals also has a detrimental impact on their freedom of expression, on their right to remain anonymous, as well as to their right to protest.

US lawmakers warned Facebook and Google against using their features to interfere with the flow of political content, and expressed concerns about political biases of both employees and external partners such as fact checkers.

The majority of responses from Facebook CEO Mark Zuckerberg and Google CEO Sundar Pichai were vague on this issue.

ARTICLE 19 has repeatedly stated that the interference in election processes is particularly dangerous for freedom of expression and deeply undemocratic, and it can have a substantial impact on votes.

During the hearing the Companies often defended themselves by pointing to policies they have in place to address a specific issue.  This is a familiar recourse when challenged on the impact of their content moderation practices.

Without this information we cannot hold them to account, either on the impact of their attempts to minimise the spread of disinformation or hate speech, or on the impact of more general efforts to protect freedom of expression online and guarantee users’ privacy and other fundamental rights.

ARTICLE 19 welcomes the scrutiny of the Big Four and big tech practices  but this important moment to address the threat they pose for freedom of expression in the context of antitrust law, must be truly grasped.