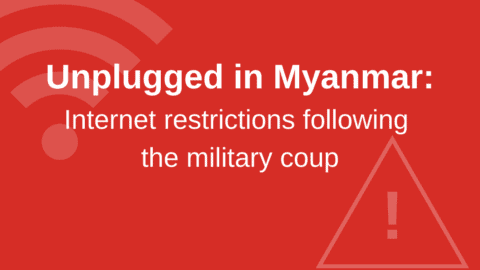 In the months since the coup, the military has enacted increasingly sophisticated restrictions on internet access. In the immediate aftermath of the events of 1 February, the military often imposed blanket, but time-bound, restrictions on internet access. The military has recently moved to an approach of ‘whitelisting’, in which all mobile internet access is blocked save for pre-approved websites and applications. However, the degree to which this policy is being implemented is unclear, and internet users continue to be able to access a wide range of websites. By making internet access the exception rather than the norm, the government has violated the right to freedom of expression and access to information, which may only be restricted under limited conditions defined by international law.

While imposing internet restrictions, the military enacted changes to Myanmar’s Penal Code—many of which target expression, including online expression. New or amended crimes carry severe penalties for, among other things, expressing opinions critical of the government. Internet restrictions and the threat of criminal sanction have severely constricted the operating environment and forced many civil society organisations to limit their work or shut down entirely. Internet service providers (ISPs) have come under increased pressure to implement policies that would provide expansive surveillance powers to authorities.