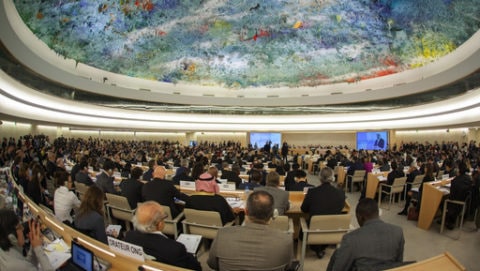 ARTICLE 19, joined by leading civil society organisations, has written to States at the UN Human Rights Council (HRC) to urge them to either defer or vote against a draft resolution on “the effect of terrorism on human rights”, proposed by Egypt.

Egypt’s draft resolution will be considered for adoption at conclusion of the 31st Session of the UN Human Rights Council on the 23rd or 24th of March.

The letter argues that the draft resolution does not conform to the HRC’s mandate, and if adopted would undermine existing international human rights standards, including on freedom of expression. This would potentially be used to justify over-broad counter-terrorism measures that are abused to target civil society, journalists and human rights defenders.

The letter calls on all States to ensure that resolutions of the HRC do not instrumentalise the victims of terrorism to undermine international human rights law. Instead, the HRC must reaffirm that civil society space and freedom of expression are essential to secure societies.

Re: States must vote against Human Rights Council resolution on “the effects of terrorism on the enjoyment of human rights” (HRC/31/L.13)

The undersigned non-governmental organisations write to express serious concerns regarding the draft resolution on “the effects of terrorism on the enjoyment of human rights” (HRC/31/L.13). We call for your delegation to seek the deferral of L.13 to the 32nd Session, so that the shortcomings outlined below can be fully addressed, or failing this to vote against it at the present Session.

The draft resolution, tabled by Egypt, Algeria, Jordan, Morocco, and Saudi Arabia, suffers from significant defects that in our view cannot be corrected without a substantial renegotiation and redrafting of the text as a whole. The draft resolution does not conform to the HRC’s mandate and undermines existing international human rights standards, threatening the very freedoms that are essential to secure societies. At the same time, the draft resolution fails to respond to the needs of victims of terrorism, instead instrumentalizing them to weaken the international human rights system that is designed for their protection. The report requested of OHCHR should not be framed on this basis, not least of all because it would be an unnecessary duplication of existing recent work properly framed in international human rights law.

The most significant deficiencies in draft resolution L.13, which should be considered as the basis of a deferral, can be summarised under three interrelated headings:

● Ensuring counter-terrorism measures comply with international human rights obligations: the draft resolution does not make it explicitly clear that counter-terrorism measures should always comply with international law, including human rights law, humanitarian law and refugee law. In particular, OP4 could be read as justifying counter-terrorism measures that violate these obligations. The use of the term “as applicable” in relation to almost all references to international human rights law obligations creates the impression that these are optional rather than obligatory (see, in particular, OP8). These formulations are incompatible with and threaten to undermine the clarity and balance struck in previous consensus-based resolutions in the Security Council, General Assembly, and HRC.

● Civil society space and freedom of expression: the resolution fails to acknowledge the importance of a safe and enabling environment for civil society, human rights defenders and an independent media, and to ensure that counter-terrorism laws do not hinder their work. In the context of increasing violations of the rights to freedom of expression, association and assembly on the pretext of “national security”, frequently through the application of legislation that does not comply with international human rights standards, this omission distracts the HRC’s attention from this critical issue. Indeed, the call on States to “bring to justice” “in accordance with national criminal laws” those engaged in acts such as “incitement” to terrorism (OP8), raises concerns. The concept of “incitement to terrorism” is often abused and interpreted expansively, in particular where applied against the narrow requirements of international human rights law: OP8 may be interpreted as giving justification to such abusive interpretations. These concerns are reinforced by paragraphs that seemingly portray both the media and information communication technologies as threats to national security, without providing clear safeguards for the right to freedom of expression:

○ OP7 introduces vague concepts of “propaganda platforms” (including any “media”) “for disseminating hatred or instigations”, encouraging States to “refrain from supporting” them with no assurance that any limitation on the right to freedom of expression must comply with international human rights law. These ambiguous terms, if used as the basis for restricting freedom of expression, would not meet the requirement of being “provided for by law” as required under Article 19(3) of the International Covenant on Civil and Political Rights.
○ OP10 makes substantial additions to carefully negotiated UN Security Council language, resulting in the loss of clarity that any “preventative” measures to target the criminal activities of terrorists online must comply
with international human rights law. Though reference to the positive role of the Internet in countering
terrorism is welcome, the citation to the “constructive role” of the “Cyber Observatory of Takfiri Fatwas of
Egypt” is concerning, given the worsening situation for freedom of expression online in Egypt.

● A national security focus inappropriate to the HRC’s mandate: the predominant focus of the resolution is on
protecting national security, rather than on the protection of human rights. The limited attention given to the issue of human rights is under-inclusive, with attention only on the right to life, liberty and security (Article 3 UDHR), without due regard to other protections such as the absolute prohibition on torture, or the targeting by terrorists of human rights defenders and journalists for exercising their right to freedom of expression. As such, the resolution’s security-driven approach, taken together with its underinclusive assessment of the actual human rights impact of terrorism, is not appropriate to the HRC.

Though the sponsors have presented this draft resolution and its predecessor as victim-centred, little in the resolution responds to the needs of victims, but instead uses this as a basis to justify measures that too often violate human rights. Though draft resolution L.13 “takes note” of previous HRC mandated reports relevant to the impact of terrorism on the enjoyment of human rights,[1] it nevertheless seeks through OP17 a duplication of these in the form of an additional OHCHR report. The rationale for this exercise and what value a further report would add is unclear.

We strongly urge your delegation to seek a deferral of draft resolution L.13 at the 31st Session of the UN Human Rights Council, or if this is not amenable to the co-sponsors to call a vote and vote against it.

[1]  The HRC received the views of victims of terrorism through a Panel on the topic in 2011 (A/HRC/19/38, 7 December 2011), and this was the focus of Ben Emmerson’s first report as Special Rapporteur on the promotion and protection of human rights and fundamental freedoms while countering terrorism (A/HRC/20/14, 4 June 2012). The OHCHR has already set-out standards in their Fact Sheet No. 32 on “Human Rights, Terrorism and Counter-terrorism”, though this is not referenced in the draft resolution.