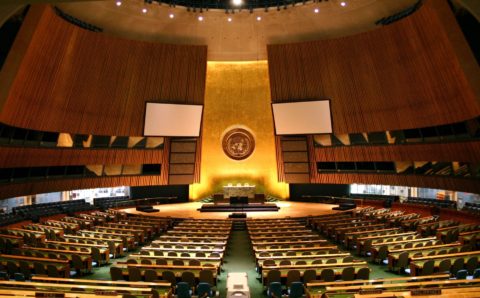 World leaders have taken the podium at the UN General Assembly in New York this week to set out their visions and global priorities, including on human rights. Several of them only enjoy this platform having been propelled to power by political campaigns that propagated hate against marginalised and discriminated against individuals and groups.

Civic space is shrinking globally, with disproportionate impacts for people speaking out against discrimination and violence. While populist demagogues may claim to be free speech champions, it is they who are quickest to shout down opposition, and incite violence against anyone who exposes their lies.

Hate campaigns target religion or belief minorities, indigenous peoples, racial minorities and migrants, women and LGBTI people, as well as those who stand up for their rights. Action to tackle hate is therefore essential not only to prevent violence and discrimination, but to truly protect freedom of expression for all.

Echoing a recent call for action from UN human rights experts, ARTICLE 19 is calling on political leaders to recognize and act on their responsibilities. As the UN Secretary General’s Strategy and Plan of Action on Hate Speech launched earlier this year implores, effective efforts must both seek to address the root causes driving hate, while also meeting the needs of victims of hate. The strategy requires freedom of expression and freedom of religion or belief to be protected for all people, in particular those bearing the brunt of discrimination and violence.

Both the call for action and the UN strategy build on existing international human rights standards, including the Rabat Plan of Action, which provides extensive guidance on what must be done. Against the rising tide of hostile discourse, political and religious leaders, public officials, and the media, should not only refrain from hate speech, but actively reject such expression and speak out against it. A whole of society approach is needed, where a plurality of stakeholders are mobilized, with the full and effective participation of those most affected by hate.

The Rabat Plan of Action establishes a clear threshold at which States must limit the most severe forms of hate speech, namely incitement to hostiltiy, discrimination or violence, under Article 20(2) of the ICCPR. Impunity for incitement of violence is a significant problem. But Rabat also emphasises the primacy of positive and preventative policy measures to address the root causes of violence and discrimination, in particular by creating space for those most impacted by hate to speak out and be heard. Crucially, human rights defenders who work to combat discrimination must be protected, and not harassed through overly broad laws on hate speech, blasphemy or national security, or targeted with violence themselves.

Addressing hate online necessarily requires social media companies abiding by their responsibilities to respect rights. They must ensure that their content moderation policies are responsive to the needs of victims of hate by adopting a radically new approach to transparency and establishing real accountability mechanisms. In light of updates to the Global Internet Forum to Counter-Terrorism to tackle “violent extremism” online, including as part of efforts to implement the Christchurch Call to Action, the need to protect human rights in the digital sphere is especially important.

This policy approach is not new. Consensus-based UN resolutions on countering religious intolerance and on freedom of religion or belief have been demanding action in this field for years. Follow-up resolutions on this theme will be considered during UNGA Third Committee in the coming weeks, at a time where the UN is taking an increasingly intersectional approach – as evidenced by the diversity of expert mandates that joined together to speak out on this topic. This is also seen in the push in the Sustainable Development Goals for inclusive and peaceful societies, and in the Global Compact for Migration.

As leaders’ week at the UNGA gives way to Third Committee, it is important that States focus on ways to translate UN commitments and action plans into change on the ground. On 18 – 19 November, the Netherlands will host the 7th Istanbul Process meeting, bringing together national experts and practitioners to do exactly that. It is important that political leaders who reject hate and who value civil society space participate, and make clear what action they are taking at the national level to protect the rights of all people in their societies.