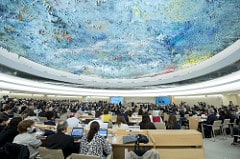 Human Rights Council (HRC) Resolution 16/18 addresses ‘combating intolerance, negative stereotyping and stigmatisation of, and discrimination, incitement to violence, and violence against persons based on religion or belief’, and was adopted by consensus in March 2011. It is widely regarded as a landmark achievement of the HRC’s first decade.

Resolution 16/18 commits States to addressing religious intolerance through promoting the interrelated and mutually reinforcing rights to freedom of expression, freedom of religion or belief, and non-discrimination.

To do this, it sets out an action plan for States to:

(a) Create collaborative networks to build mutual understanding, promoting dialogue and inspiring constructive action in various fields;
(b) Create a mechanism within Governments to identify and address potential areas of tension between members of different religious communities, and assisting with conflict prevention and mediation;
(c) Train Government officials in effective outreach strategies;
(d) Encourage efforts of leaders to discuss within their communities the causes of discrimination, and evolve strategies to counter them;
(e) Speak out against intolerance, including advocacy of religious hatred that constitutes incitement to discrimination, hostility or violence;
(f) Adopt measures to criminalise incitement to imminent violence based on religion or belief;
(g) Combat denigration and negative religious stereotyping of persons, as well as incitement to religious hatred, including through education and awareness-building;
(h) Recognise that the open, constructive and respectful debate of ideas plays a positive role in combating religious hatred, incitement and violence.

Every year since 2011, the HRC has adopted follow-up resolutions to 16/18 by consensus (most recently Res 28/29). This includes positive references to the OHCHR’s Rabat Plan of Action, which provides authoritative legal and practical guidance on implementing States’ obligation under Article 20(2) of the International Covenant on Civil and Political Rights (ICCPR) to prohibit “any advocacy of national, racial or religion hatred that constitutes incitement to hostility, discrimination or violence”.

The primary role of counter-speech

Resolution 16/18 rests on the rationale that, as a default, more expression is the best antidote to intolerance, coupled with policies and laws to tackle the root causes of discrimination. This is also the crux of the Rabat Plan of Action.

Positive and non-coercive measures have a key role to play in creating a climate for dialogue, including on sensitive issues, as indicated in Seven of the eight “action points” of the resolution. Limitations on freedom of expression are foreseen, but only as an exceptional measure in very narrowly defined circumstances. Where less restrictive means of addressing intolerance are available, they should be fully employed first. This speaks against the tendency of certain States to respond to real, or perceived, religious tensions by restricting civic space.

Multiple stakeholders have an important role to play in “changing hearts and minds” and promoting mutual understanding within and between groups. The Rabat Plan of Action identifies national human rights institutions, civil society, independent media and a free and open Internet in this regard, notably referencing the Camden Principles on Freedom of Expression and Equality.

The “defamation of religion” question

Resolution 16/18 reconciled increasingly polarised views on the best way to tackle intolerance and discrimination on the basis of religion or belief, and replaced divisive calls at the HRC (and the Commission before it) for States to combat “defamation of religions”, a concept analogous to “blasphemy”.

International law protects rights as they attach to people: the right of individuals to hold opinions and express ideas of all kinds, and the right to have, adopt and manifest a religion or belief. It does not allow States to restrict expression to protect religions, beliefs or ideas themselves. While international law requires States to prohibit discrimination against people on the basis of their religion or belief, it does not entitle individuals to have their religion, beliefs, opinions or ideas protected from scrutiny, debate, insult or even ridicule. This does not constrain individuals from speaking out against expression that they find offensive, as this too is their protected right.

International standards clearly require the repeal of blasphemy laws. The UN Special Rapporteur on freedom of religion or belief has repeatedly called for this, citing both the Rabat Plan of Action and the Human Rights Committee’s General Comment No. 34, as have UN and regional free expression mandates. They observe that such laws are discriminatorily applied against religion or belief minorities and dissenters and limit open debate, and therefore counter-productive to advancing mutual understanding. Instead, blasphemy laws fuel discrimination, incitement to violence, as well as acts of violence by State and non-State actors.

It is imperative that the HRC guards against the return of the “defamation of religion” concept in any form: it runs contrary to established international standards, and could reopen the ideological fracture bridged by resolution 16/18. Such a fracture would greatly undermine the credibility of the institution as a platform for action against human rights abuses.

Paragraph 5(f) of Resolution 16/18 represents a consensus in favour of States criminalising incitement to imminent violence on the basis of religion or belief, and echoes States’ broader obligations under Article 20(2) ICCPR to prohibit “any advocacy of racial, national or religious hatred that constitutes incitement to hostility, discrimination or violence.” However, the scope of these commitments and obligations (respectively) remains a contentious issue at the HRC.

The Rabat Plan of Action makes clear that limitations under Article 20(2) ICCPR must also meet the three-part test under Article 19(3) of the ICCPR, i.e. must be (a) legally precise, (b) pursue a legitimate aim, and (c) be necessary and proportionate to that aim. It proposes a high “threshold test” with six-factors to help prosecutors and judiciary identify where prohibitions may be justified, including: (i) the social and political context, (ii) the speaker, e.g. his or her status and influence, (iii) the intent of the speech, (iv) the content or form of the speech, (v) the extent of the speech, and (vi) the likelihood and imminence of actually causing harm.

By insisting on this high threshold, the Rabat Plan of Action identifies and safeguards against two kinds of human rights abuse that arise in the context of applying incitement laws:

In implementing resolution 16/18, States must commit to ensure accountability for these human rights violations.

Implementation is key: the Istanbul Process

The Istanbul Process is a series of inter-governmental meetings, initiated in 2011, to promote and guide implementation of resolution 16/18. It has enormous potential to be a cross-regional, inclusive, and participatory forum for exchanging best practices in tackling intolerance on the basis of religion or belief.

Fulfilling this potential requires there to be a greater diversity of participant States in the Istanbul Process, in particular of host nations. Representation should be drawn from domestic government ministries and agencies whose mandates encompass public efforts to tackle discrimination: these individuals hold the practical experience which would make the exchange most valuable. This would be enhanced further by a multi-stakeholder approach, seeking meaningful exchanges of views and approaches with civil society, national human rights institutions, the media and others. A practical and practitioner-focused agenda would catalyse implementation efforts, including by encouraging innovation and cross-border collaborations.

Reporting through OHCHR on implementation of resolution 16/18 would also be reinvigorated by broader participation, from both State actors and other stakeholders.

For States to consolidate consensus on resolution 16/18 through implementation:

For all other stakeholders: