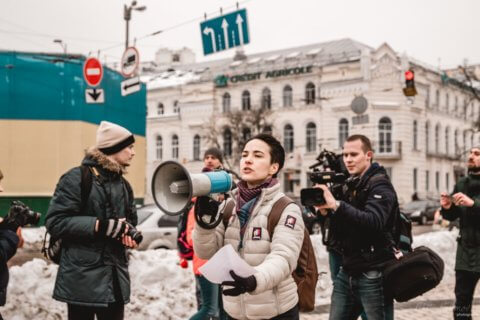 Olena Shevchenko, a Ukrainian human rights activist, has been charged with “violation of order of organizing public assemblies” for “offending national symbols of Ukraine” in relation to a banner displayed at a public rally she organised on International Women’s Day. Shevchenko has also been subject to threats and intimidation by far right groups in connection to the rally. The Ukrainian government must immediately drop these charges and ensure that proper security measures are in place, enabling all people to exercise the right to peaceful assembly.

“The sole aim of these charges is to obstruct the right to protest”, said Katie Morris, Head of Europe and Central Asia at ARTICLE 19. “The Ukrainian government has an obligation to ensure that all groups can engage in public protest; instead authorities turn a blind eye to violence against peaceful protesters, while using the law to silence expression they disagree with”, she added.

On 8 March 2018, Olena Shevchenko co-organised a public rally dedicated to women’s rights, gathering around 1000 participants. Despite the presence of the police to protect the assembly, several participants were attacked by far-right groups which had gathered as counter protesters. Two of those attacked submitted complaints to the police; however, these have not yet been responded to.

After the rally, police informed Ms Shevchenko that she was accused of violating Article 185-1 of the Code of Administrative Offences: “Infringement of the order of the organization and conduct of assemblies, meetings, street campaigns and demonstrations” for displaying a banner during the assembly which “offended national symbols of Ukraine”. The banner depicted a woman being oppressed by traditionalism, domestic violence, trafficking and ultra-right radicalism. It used the following symbols: a cross, a coat hanger (symbolising abortion), a coin, a rope and the symbol of a far-right group, similar to the official coat of arms of Ukraine.

On 12 March 2018, the first court hearing took place against Ms Shevchenko. This was attended by far right radicals, who used threats and slurs towards her in the courtroom.  The next court hearing will take place on 15 March. Case materials indicate that the Court may change charges against Ms Shevchenko from administrative to criminal under Article 338 of the Criminal Code: Outrage against state symbols, punishable by a fine of up to 50 tax-free minimum incomes, imprisonment for a term up to six months, or restricted freedom for up to three years.

International standards do not permit restrictions on the right to freedom of expression which are made in order to protect “the state” or its symbols from insult or criticism. As the Johannesburg Principles on National Security, Freedom of Expression and Access to Information state: No one may be punished for criticizing or insulting the nation, the state or its symbols, the government, its agencies, or public officials, or a foreign nation, state or its symbols, government, agency or public official unless the criticism or insult was intended and likely to incite imminent violence.[1]

Similarly, the UN Special Rapporteur on Freedom of Expression has expressed the view that “international human rights law protects individuals and groups of people, not abstract notions or institutions that are subject to scrutiny, comment or criticism”[2].

ARTICLE 19 considers that all criminal provisions prohibiting insult or defamation of the State, nation or national symbols should be repealed as they have a chilling effect on freedom of expression and may be used by the states to silence dissent.

ARTICLE 19 is also concerned about the increasing crackdown on Ukrainian civil society, especially marginalised groups, who are not protected by the State from attacks by far-right groups. Ukrainian authorities must ensure that everyone’s right to peaceful assembly, association and freedom of expression is respected.

[2] Report of the Special Rapporteur on the promotion and protection of the right to freedom of opinion and expression, Human Rights Council, 14th Session, 20 April 2010