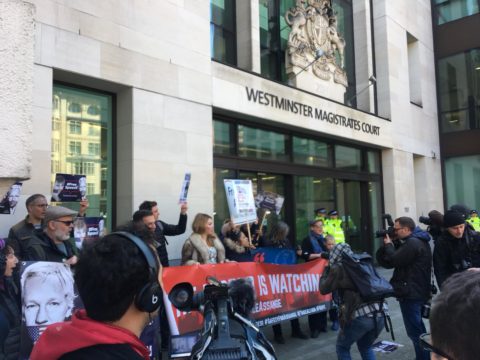 ARTICLE 19 is concerned by yesterday’s arrest of Julian Assange, founder and publisher of Wikileaks, on the basis of a US extradition request, detailed in the subsequent confirmations of the UK Metropolitan Police, UK Home Office, and the US Justice Department.

The US Justice Department has said that the arrest was based on the “federal charge of conspiracy to commit computer intrusion for agreeing to break a password to a classified US government computer”. The charges relate to Assange’s work with whistleblower Chelsea Manning in 2010, which have since led to her imprisonment for 7 years, and ongoing detention under contempt of court charges for failing to testify in an investigation into Wikileaks. Originally, the UK authorities stated that they arrested Assange on the basis of having fled bail in the UK in 2012, related to an investigation into allegations of sexual assault in Sweden, and a linked extradition request.

“We urge the UK government not to participate in US efforts to prosecute Julian Assange and those who have been involved in the legitimate exposure of abuses by the government, in the public interest. Extradition to the US will result in Assange being prosecuted and potentially imprisoned for exposing human rights violations, and the UK government must not be complicit in this.”

“Assange has been part of exposing a number of human rights violations by US government and military forces, including deliberate targeting civilians by coalition forces and possible violations of the Fourth Geneva Convention. Efforts to extradite him to the US on this basis would represent a violation of the right to freedom of expression, and set a dangerous precedent for journalists and whistleblowers exposing human rights abuses by their governments.”

“The UK and the US Governments must act on their commitments to freedom of expression and ensure that those publishing information in the public interest or interacting with sources are not criminalised and prosecuted.”