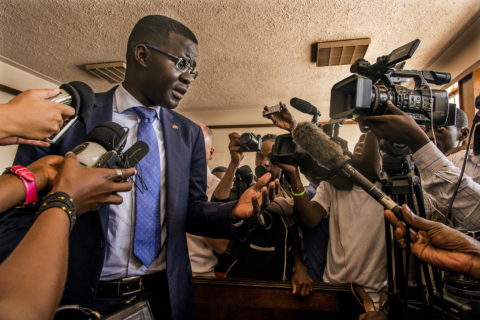 ARTICLE 19 called today for the immediate and unconditional release of five activists: Nicholas Opoyo, Anthony Odur, Herbert Dakasi, Simon Peter Esomu, and Tenywa Hamid. They were arrested on Tuesday 22 December by more than a dozen plain-clothed police officers in a Kampala restaurant.

“It is shocking to see that Uganda’s government allows the arbitrary arrest of civil society activists and lawyers with a dissenting opinion. This latest arrest is part of a worrying pattern of muzzling dissenting voices and shrinking civic space.It is increasingly dangerous to be part of Uganda’s opposition. We call for the immediate release of Nicholas Opiyo and his colleagues and urge the government to implement its human rights obligations as guaranteed in the constitution of Uganda.”

“Opiyo’s arrest is sending a scary message about the environment in which civil society in Uganda are working. Opposition leaders, activists, citizens and civil society continue to be on the receiving end. We see the arrest as part of a campaign of repression targeting perceived government opponents. The government continues to use high handed means to shrink civic space in Uganda. We urge the government to appreciate the role that the civil society plays in promoting civil liberties.”

Mr Opiyo is a renowned human rights lawyer and the Executive Director of Chapter Four Uganda, a leading organization dedicated to protecting civil liberties and promoting human rights for all in Uganda. On social media, the police have alleged that Opiyo has been arrested on allegations of money laundering and related malicious acts. Opiyo has been vocal against the government’s repressive laws and directives on civil society. He represented two NGO’s whose bank accounts were frozen weeks ago following the accusation of financing terrorist activities.

The five activists are currently detained at the Special Investigations Division in Kireka. They are yet to be informed of the reason for their arrest and were only allowed to speak to their lawyers 20 hours after their arrest. Article 23 of the Ugandan constitution stipulates that suspects under detention should be brought before a court of law within 48 hours from the time of arrest. But the five activists are held in complete disregard of this fundamental right. Additionally, the arresting officers did not identify themselves during the arrest, as required by the Ugandan law.

ARTICLE 19 is concerned about the continued use of force and limitation of freedoms and rights by the Ugandan government as the country heads to the general elections planned for January 2021, in which 76-year-old President Yoweri Museveni is seeking his sixth term facing young singer turned politician Bobi Wine.

ARTICLE 19 condemns this arbitrary arrest of civil society members and demands that Opiyo and his colleagues are immediately and unconditionally released. The organization urges the government to respect dissenting voices.