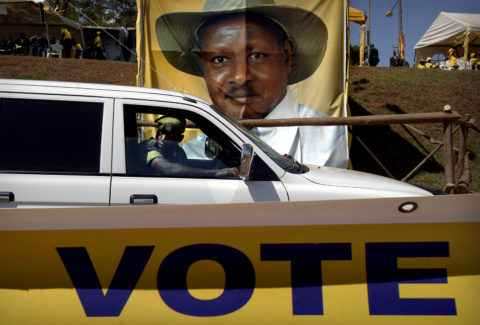 One of President Yoweri Museveni's military bodyguards passes a billboard at an election rally in the lead-up to Uganda's first multi-party election since Museveni came to power in 1980. Credit: Sven Torfinn

Article 19 condemns the use of excessive force, teargas and live ammunition against protesters in Uganda. According to reports, at least 16 people have been killed, 65 injured and over 350 arrested following protests against the arrest of presidential aspirant Robert Kyagulanyi alias Bobi Wine. Mugambi Kiai, Article 19 Eastern Africa Regional Director, said:

“It is shocking that the police chose to shoot live ammunition at peaceful protesters. They can only use firearms if there is a threat to life, which was not the case. The authorities must investigate the excessive use of force which has resulted in so many deaths.

They should also unconditionally release all people who have been arrested solely for exercising their constitutional right to freedom of assembly.”

On 18 November 2020, presidential aspirant Robert Kyagulanyi was arrested and charged on the grounds of flouting Coronavirus prevention guidelines against drawing large crowds following a campaign rally in the country.

The next day, protests broke out in several parts of the country with citizens calling for his immediate release.Peaceful protesters were however met with excessive force, teargas and live ammunition from security forces, resulting in the death of at least 16 people, 65 injured and over 350 arrested.

In response to the protests, a government spokesman said that the police officers had responded appropriately. He blamed the protesters for not seeking more “peaceful methods” to raise and “resolve” their concerns using legal means. The president, in a later address to the ruling National Resistance Movement  leaders, warned that the protesters who “were being used by foreigners who dislike the stability of Uganda” would regret it.

According to ARTICLE 19’s monitoring of protests in Uganda, law enforcement officers often show little to no restraint in their use of force on protesters, in violation of the protections afforded by the constitution of Uganda and international human rights obligations.

The Public Order Management Act which requires organizers of protests to give prior notification, grants the Inspector General wide discretion to prohibit public meetings. The police use the act to justify the blocking, restricting and dispersal of peaceful meetings and demonstrations.

“It’s high time the Ugandan government commits to protect the rights of everyone in the run-up to the elections and ends the crackdown on the opposition. They should instruct the police to facilitate the right to peaceful assembly rather than blocking and disrupting campaign meetings.” said Mugambi Kiai.

Further, in the run-up to the 2021 general elections, authorities have attacked presidential candidates and their supporters, often arbitrarily arresting them, using excessive force and live ammunition to block them from attending their campaign rallies, and dispersing crowds during campaign meetings and gatherings under the pretext of enforcing COVID 19 containment measures.

Despite the direction given by the electoral commission, on 2 December 2020 Bobi Wine briefly called off campaign activities citing “continued police brutality against him and his supporters.” A day earlier, his right hand man Daniel Oyerwot was injured at a campaign meeting in Kayunga district after the police fired teargas and rubber bullets to disperse their supporters. On his way to the second campaign rally in Jinja city, the police and army personnel reportedly shot Bobi Wine’s car tyres and shattered the windscreen.

The right to freedom of expression and freedom of peaceful assembly is guaranteed by Uganda’s Constitution, the ICCPR and the African Charter on Human and Peoples’ Rights. It may be subject to narrowly tailored limitations, but only if it is provided by law, has a legitimate aim and is necessary and proportionate. The right to freedom of peaceful assembly may be restricted to protect public safety.

The African Commission’s guidelines on freedom of association and assembly in Africa underscore that protest is a right, for which no prior authorization should be needed. Lack of prior notification does not make an assembly unlawful and should not be the sole reason for dispersal.

The police should prioritize facilitation and avoid the need to resort to force, even if the assembly is considered unlawful. The dispersal of any assembly should only ever be used as a measure of last resort and in exceptional circumstances; force should never be used against peaceful protesters. Firearms should never be used to disperse. Even if protesters are violent, law enforcement officials can only use firearms to disperse when strictly necessary to protect life. The police may only use tear gas to disperse a crowd when there is more generalized violence, due to its indiscriminate effects and high potential of harm.

ARTICLE 19 calls on the Ugandan government to immediately fulfil its international human rights obligations, in particular the right to peaceful assembly throughout the country.