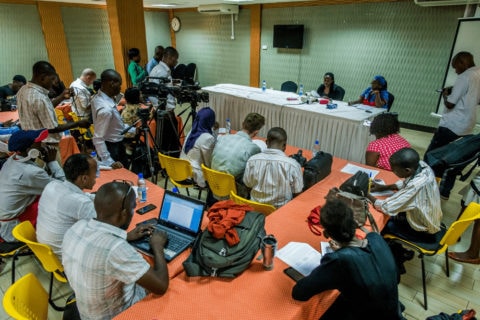 ARTICLE 19 strongly condemns the arrest and charge of two Ugandan journalists, in the wake of political tensions in the country ahead of the Wednesday by-election to choose the Arua Municipality MP. We call on Ugandan authorities to refrain from further harassment and intimidation of media workers.

Several journalists, including NTV’s Herbert Zziwa, Ronald Muwanga, and their driver were arrested on Monday night while reporting on the death of opposition lawmaker Kyagulanyi Ssentamu’s (popularly known as Bobi Wine) driver in Arua town. Wine posted on his Twitter that police had shot his driver dead. NBS camera-person Yiga Julius Bakabaage,is current in hospital following an assault by police while reporting on the event.

Journalists had rushed at the scene of crime and were reporting live on the incident when police assaulted them and placed several under arrest. The two arrested journalists are being charged with incitement to violence and malicious damage under Section 51 of the Penal Code. These trumped up charges are aimed at deterring journalist from reporting on the upcoming by-election and related human rights violations. They were released this afternoon from Gulu Central Police Station on bail.

In recent months, there has been an escalation of arbitrary arrest, physical attacks and harassment of journalist by both police and political supporters regrettably from the main ruling National Resistance Movement political party. The rise of attacks against journalists and media workers clearly points to a similar trend that was witnessed in the run up to February 2016 general election.

On 13 July, journalists Kenneth Odere of NTV, Eddy Enuru of NBS TV and Simon Emwamu of Daily Monitor were arrested by police for covering protests that had been organised by local mobile money operators against a new government tax on mobile money transactions. The three were arrested and taken to Katakwi police station in Eastern Uganda after covering a peaceful protest. District Police Commander, Tonny Ondoga demanded that the journalists surrender their recorded material and also reveal the names of the organizers of the protest that was deemed “unlawful assembly without police permission”, in violation of the right to protest.

On 17 July, Vision Group journalist Ronald Kasasa was assaulted by police while covering a meeting called by the Resident City Commissioner (RCC) Nakawa, Jackie Kemigisha to announce the results of the then concluded Local Council Elections. Kasasa reported his case at Jinja Road Police Station. Barely a week on 14 July earlier, freelance journalist Emma Alumu and Opio Sneijder Emmanuel of Etop Newspaper had been assaulted by police while covering another protest. Another journalist, Moses Okello for Radio Devine was assaulted by supporters of the ruling National Resistance Movement party. Okello was covering the elections of the Youths and Special Interest groups at Apac Mayor’s Garden.

“This wave of physical attacks, arbitrary arrest and harassment of journalists’ flies in the face of the requirement to protect and promote freedom of the media as provided for in the Ugandan Constitution. We urge police to end assaults and legal harassment of journalists and abide by the constitution and laws regarding freedom of expression,” said Henry Maina, Regional Director of ARTICLE 19 Eastern Africa.

ARTICLE 19 further calls on the Ugandan government to take action to create an environment in which journalists can carry out their work without fear of reprisal, including through ending the use of vague legal provisions to criminalise journalistic activity, and ending the excessive use of force by police against journalists.