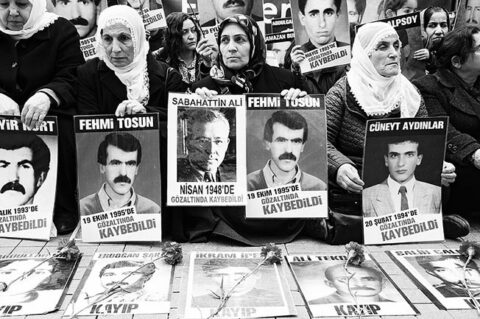 On Monday, 22 November 2021, Bar Human Rights Committee of England & Wales (BHRC) and ARTICLE 19 submitted an expert opinion in the case of Saturday Mothers/People1For convenience, this publication uses the term “Saturday Mothers” to refer equally to all people who participate in the movement.. ​The defendants face between six months to three years of detention for their involvement in a peaceful protest on 25 August 2018. The next hearing of the case will be held on 24 November, before the Istanbul 21st Penal Court of First Instance.

Saturday Mothers is a group of human rights defenders and families of victims of enforced disappearances in Turkey. Since 1995, they have been regularly gathering at Galatasaray Square in Istanbul to commemorate their relatives through a sit-in, silent protest combined with a vigil. Saturday Mothers’ quest for justice and truth receives strong and steady support from a myriad of civil society groups in Turkey and beyond. The group demands that the authorities finally hold those responsible for enforced disappearances to account.

On 25 August 2018, the authorities abruptly banned the 700th week of protest which was due to be held on the very same day. The decision was based on the grounds of “national security”, and justified by the lack of notification from the organisers to the authorities 48 hours prior to the vigil. Yet, in the morning of 25 August, around 50 people gathered at Galatasaray Square in Istanbul to carry out another week of protest. Law enforcement urged the crowd to disperse and used excessive measures against the participants, including tear gas, rubber bullets and physical violence, and the persons who refused to disperse were arrested and detained. According to the Human Rights Foundation of Turkey, 12 of the protesters sustained injuries.

In October 2020, 46 people were charged with “participating, unarmed, in an unlawful meeting and refusing to disperse despite being warned to do so”.

BHRC and ARTICLE 19 prepared an expert opinion on the compliance of the charges against the defendants, with international and European law and standards on the right to protest. BHRC and ARTICLE 19 outline serious concerns regarding the various and disproportionate interferences with the defendants’ right to engage in a peaceful assembly that were likely to be motivated by a desire to suppress the message of their protest. In such a case, these interferences contradict both, Articles 11 and 18 of the European Convention on Human Rights (ECHR).

In the expert opinion we highlighted, inter alia, the following, vital issues that should be taken into consideration while analysing this case.

BHRC and ARTICLE 19 are submitting this legal expert opinion to once again emphasise that freedom of expression and assembly are inherent components of any democracy and enable civil society to thrive. We will continue to closely monitor the developments in this case.