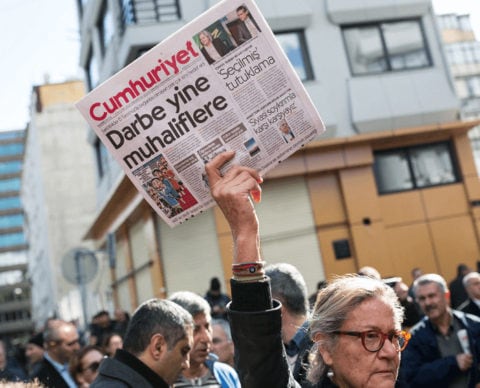 “Ahmet Şık has been a thorn in the side of the authorities, with his work as an investigative journalist and more recently as an opposition MP. These new potential charges reek of political interference and form part of a cycle of judicial harassment of Şık which will further delay justice until his case reaches the Turkish Constitutional Court.”

“Şık has been consistently singled out by the authorities, suffering extreme conditions in prison, including being placed in solitary confinement and being denied water. He now faces the possibility that his case will be separated from the other defendants.  We urge the panel of judges to reject this call for a re-trial and to drop charges against Şık and the other defendants.”

Background to the case

Şık was one of 17 Cumhuriyet staff and board members who were arrested and held in pre-trial detention at Silivri prison, between October 2016 and April 2017. Cumhuriyet is Turkey’s oldest and largest independent newspaper.

In the first trial, Şık was sentenced to seven years and six months for ‘aiding a terrorist organisation without being a member’. However on 12 September the Supreme Court of Appeals overturned this ruling and ordered a retrial with new, harsher charges of “legitimising the acts of a terrorist group” and “denigrating the bodies and organs of the state of the Turkish Republic”. If found guilty, he could face up to 37 years in prison. No new charges were proposed for the other defendants.

The cases brought against the defendants were almost identical but during the court proceedings, some of them were released and some were not.

Şık, who is also a member of parliament for the pro-Kurdish, Peoples’ Democratic Party (HDP), was treated particularly harshly while in detention. He was imprisoned for over 14 months from December 29, 2016 to 9 March 2018. For the first week of his detention, he was placed in solitary confinement and was even refused drinking water.

On July 26, 2017, the UN Working Group on Arbitrary Detention found the detention of ten of the Cumhuriyet journalists to be arbitrary but the Turkish authorities ignored their findings.