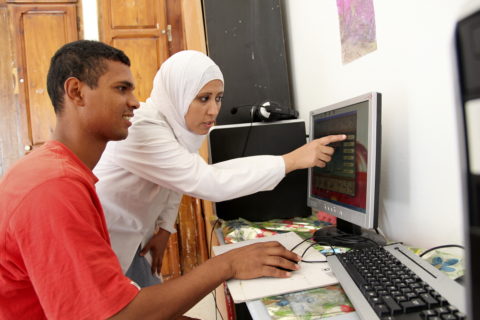 A social worker helps a boy to use a computer at the Assanad centre. The boy is mentally and physically disabled and lives at the centre. Most of the children at the centre are abandoned or orphaned or come from very poor and disadvantaged families. 'Assanad' meaning 'Support' is an Institution of the Ministry of Social Affairs and UNICEF supports the training of the staff and social workers. Social workers try to reunite children with their families but in most cases they find disabled parents and/or very poor conditions.

On International Right to Know Day, ARTICLE 19 renews its call on the Tunisian Parliament to implement the new Tunisian constitutional protections for the right to information for all, as an integral part of the right to freedom of expression, by expediting the ratification of the draft fundamental law on access to information.

The draft law on access to information was withdrawn by the government on 3 July 2015 and returned to parliament in the middle of August. It has, however still not been passed to the relevant committee, suggesting that it is not considered a priority for the parliament.

“The Tunisian parliament should consider the “Access to information” law as a political priority, as it enables the implementation of the critical right to information, which is embedded in the new constitution” said Saloua Ghazouani, Director of ARTICLE 19’s Tunisia office.

“The Tunisian authorities must prioritise the adoption of laws and institutions required by the constitution, including access to information, the protection of free expression and the media and the establishment of rules ensuring transparency and accountability”, stated Ghazouani.

ARTICLE 19 urges the Tunisian parliament to make the discussion of the draft law a priority and to ratify it as quickly as possible in order to ensure the implementation of the constitution, Tunisia’s commitments under international law and obligations under the Open Government Partnership.

The draft law was withdrawn on 3 July 2015 by government after having passed through all stages of consultation and discussion before being sent to the plenary session of the People’s Representatives Assembly for ratification. ARTICLE 19 is also concerned that the project mentioned above has been transmitted since August 2014 (to the National Constitutional Assembly).

ARTICLE 19 is deeply concerned by the delays to the adoption of the law, especially considering laws passed in 2015, such as the anti-terrorism law and the prevention of money laundering law, or those proposed for the remainder of this year, such as the law regarding the punishment of offenses against the armed forces, which pose a significant threat to freedom of expression.

As the world celebrates International Right to Know Day, which takes place on 28 September every year, ARTICLE 19 calls on the Tunisian parliament to carry out its responsibilities to protect access to information, as set out in Article 32 of the constitution, and in international law.

ARTICLE 19 also reminds Parliament that the draft law has already gone through the necessary discussions and improvements which should facilitate its reconsideration this time.