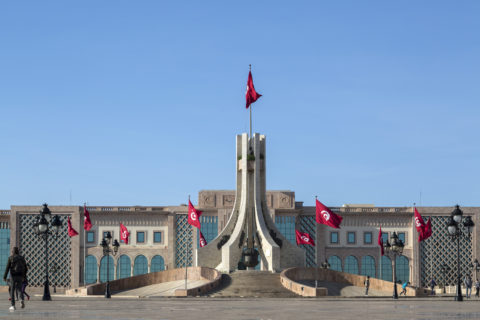 The undersigned human rights organisations and associations call on the Tunisian parliament not to adopt a proposed amendment to the Freedom of Audiovisual Communication Law (Decree-law 116/2011), which represents a serious threat to freedom of expression and a setback to the achievements that Tunisia has made in this field since its adoption. Law No. 34/2020 on amending the 2011 law is currently being presented to parliament and is scheduled for discussion on 20 October. The amendment would undermine the independence of the High Independent Authority of Audiovisual Communication (HAICA), mandated by the 2011 law and established in 2013, enabling financial and political interests to exercise greater power, and threatens media pluralism in Tunisia.

The legislative initiative being proposed by the parliamentary bloc “El Karama coalition”, which the Assembly of  the Representatives of the People decided to present to the plenary session for discussion and adoption at the beginning of the new parliamentary year, aims to alter the process of appointment to, and renew the composition of the HAICA, in  addition to the removing its power to issue licenses for the creation of TV channels.

These two amendments are inconsistent with the spirit of the Tunisian Constitution and the commitments of the Tunisian State to protect freedom of expression and information. The majority of democratic countries around the world protect the freedom of audiovisual communication, through establishing an independent public body, which can only play its major role as an institution of regulation through exercising its prerogative to issue licenses to TV channels and radio stations and set applicable rules for audiovisual communication. However, the proposed initiative to amend the 2011 law would remove the HAICA’s power to issue licenses for the creation of TV channels, plunging the Tunisian media landscape into chaos, on the one hand, and serving certain political and financial lobbies on the other hand.

Moreover, this initiative was conceived out of a limited view of audiovisual communication based on a logic of merchandise and trade that favours commercial competition over human rights and the right of all those in society, including vulnerable and marginalised groups, to access information. It would therefore breach the Tunisian state’s commitment to guarantee the right to information and to guarantee the representation of all segments of society in the media, as set out in Article 32 of the Constitution.

The UN Human Rights Committee’s General Comment No. 34 elaborates on human rights standards under Article 19 of the International Covenant on Civil and Political Rights on the right to freedom of expression, which Tunisia has ratified. It requires States to reinforce the plurality of media and to take necessary measures to prevent all unfavourable domination or concentration of media groups owned by the private sector, to prevent monopolies that could compromise the diversity of sources and opinions.

However, the proposed initiative to amend the Freedom of Audiovisual Communication Law, would mandate the election of HAICA members by an absolute majority of the Parliament, violating international standards and the spirit of the Constitution, which grants the bodies charged with monitoring the democratic process with a qualified majority when electing their members, so that no political party can dominate them. The amendment therefore poses risks to the audiovisual sector in Tunisia, which will in practice serve particular political actors and financial lobbies who are against independent regulation, and who seek to dominate audiovisual media and control its regulatory authority.

The organisations and associations signing this statement call on the Assembly of the Representatives of the People to vote against this initiative that is inconsistent with the spirit of the Constitution and in violation of Tunisia’s international human rights obligations. Parliament should instead expedite the adoption of a new organic law on Freedom of Audiovisual Communication in accordance with the Constitution’s provisions.

VigilanceAssociation for Democracy and Civic State

The Tunisian Association for the Defense of Individual Freedoms

Association of Research on Democratic Transition

Organization 10_23 to support the democratic transition

Tunisian Association for The Defense of University Values

Tunisian Coalition for the Aboliton of the Death Penalty

Tunisian Association for the Children’s Rights

Association for the Tunisian Worker

Association of the Solidarity of Thala

Association for Development and Strategic Studies of Medinin

Dancers, Citizens of the South

Tunisian Committee for the Respect of Freedoms and Human Rights