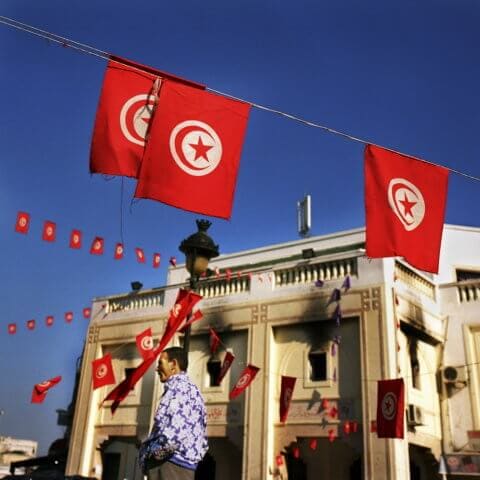 A man walks underneath national flags with a government building in the background, burned during the revolution.

The Tunisian government must reinvigorate stalled efforts for reform to solidify the progress of its democratic transition and ensure protection of human rights, including the right to freedom of expression, ARTICLE 19 said today. Despite its success in passing a progressive new constitution, and holding its first democratic municipal elections on 6 May 2018, the country has also seen a number of legislative proposals that could undermine the progress made since the 2011 revolution. We urge the government to engage with all stakeholders to ensure genuine reform and that proposals being put before parliament fully comply with international human rights law and protect the right to freedom of expression and press freedom in Tunisia.

Since its 2011 revolution, Tunisia has seen vast changes – Tunisians voted in their first democratically elected President in 2014, and the government has moved forward with a large number of reform efforts since then, including the passing of a new constitution. However, the country retains a number of older laws limiting freedom of expression and entrenching inequality. More recently, proposals which could threaten the ability of civil society to operate fully and effectively, which would put personal data privacy and access to information at risk, and which could create weak or flawed media regulation, are a cause for concern.

ARTICLE 19 urges the government to renew its efforts towards meaningful democratic progress by addressing the following issues:

Tunisia’s 2014 Constitution represented a milestone for the country, incorporating vital protections for freedom of expression, freedom of religion and women’s rights. However, implementation of key provisions has been elusive. The Constitutional Court, mandated by the Constitution to strike down laws inconsistent with its provisions and make declarations on the vacancy of the presidency has yet to be established, four years after the constitution was adopted. Without this, the compliance of national laws with the constitution is unprotected and should the president become unable to fulfil his role, the door could be left open to an unconstitutional take over of power in the absence of the court’s input. It is essential that this body is established without delay.

Despite a variety of new legislation passed by the parliament since 2011, there remain a number of older laws on the books, which contain serious restrictions on free speech and can be used to attack press freedom and silence criticism. Provisions criminalising defamation of public officials have been used to charge individuals criticising government officials or security forces. Broad restrictions on speech on the basis of vague concepts like ‘good morals’ also remain. Both are inconsistent with constitutional provisions on free expression, and the government should prioritise their reform, and cease the use of such provisions to criminalise legitimate expression.

The government should also seek to address laws that entrench inequality, in particular through implementing the recommendations of the Individual Freedoms and Equality Committee, to ensure the equal rights of all are protected in the country.

The Tunisian parliament is currently considering the Draft Organic Law on the Protection of Personal Data, which contains significant gaps in rights protections. The draft lacks exemptions for freedom of expression, particularly regarding the processing of data by journalists and civil society reporting in the public interest. It also contains provisions that potentially contradict protections in the Access to Information Law, and could limit the public’s ability to access information held by the security forces of the former regime, with implications for accountability for historic violations. The government should withdraw the current draft and make much needed revisions to ensure the law complies with the protections of the Tunisian Constitution and international human rights law.

The draft guidelines published by the Ministry in charge of relations with constitutional bodies, civil society and human rights for the revision of the current law on associations (Decree Law 2011-88) raise concerns for civil society space. Potential provisions around external funding, criteria for licenses and other issues could represent a reversal of progress that has enabled civil society in Tunisia to grow since the revolution. The proposals as they stand would restrict the rights to freedom of assembly and association and must be reconsidered in the drafting process.

ARTICLE 19 together with 23 national civil society organisations has called for the draft law establishing the audio visual communications regulator (HAICA) to be withdrawn due to the threat it presents to freedom of expression. The draft law contains vague provisions and lacks essential guarantees regarding the independence of the proposed regulator. It is also unclear how the law fits within a broader vision of media regulation and protections for press freedom. ARTICLE 19 has also been working to support the establishment of an independent press council in the country, which will form a vital part of this framework.

Establishing strong protections for human rights, diverse public debate and media freedom will solidify the hard fought democratic progress made in the country since 2011, as well as setting the foundations for its democratic future. The government must reaffirm its commitment to this progress, and to the establishment of an open, democratic and participatory society, by taking action on these pressing issues. ARTICLE 19 will continue to engage with Tunisian civil society and authorities, under the guidance of its new Regional Advisory Board[1], to support the transition process and work to strengthen protections for freedom of expression ahead of next year’s elections.