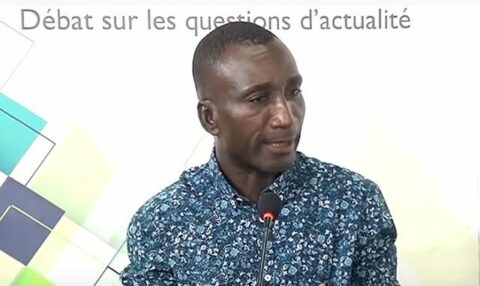 Journalist Ferdinand Ayité was among those recently arrested

ARTICLE 19 is deeply concerned by the arrest and detention of Ferdinand Ayité and Joël Egah, the publishing directors for the newspapers “L’Alternative” and “Fraternité,” on 10 December, 2021. They are accused of “defamation” and “outraging the authority”. These accusations follow a complaint filed by two government ministers, Minister of Justice Pius Agbétomey and Minister of Commerce Kodjo Adedze, who are both pastors in their respective communities. Isidore Kouwonou, another journalist, has been placed under judicial control. ARTICLE 19 calls for their immediate and unconditional release and for the lifting of the judicial control over the third journalist.

On 10 December, 2021, the Research and Investigations Brigade (Brigade de Recherches et d’Investigations – BRI) summoned the journalist Ferdinand Ayité to answer questions about remarks he made during the YouTube programme “L’Autre Journal”. The summons followed complaints from two government ministers. After being questioned, Ayité was arrested and placed under detention order and he is being prosecuted on grounds of “defamation” and “outraging authority”. These prosecutions were made on the basis of provisions in the penal code‘s articles 490, 491, 492 and 497, as well as the code for press and communication. The Public Prosecutor, Mr. Talaka Mawama, qualified these charges as arising from common law (droit commun). In fact, cinema production and social media are excluded from the scope of articles 3 and 156 of the code of the press and communication. If convicted, the accused could potentially face a prison sentence of between six months to two years and a fine of between 500,000 and one million CFA francs, or one of these two penalties.

A couple of days later, on 10 December, two more journalists who had participated in the same programme, Joel Egah, the Director of Publications for “La Fraternité,” and Isidore Kouwonou, host of the debate programme “L’Autre Journal”, were also summoned by the BRI, questioned for the same reason as Ferdinand Ayité. Egah was arrested and placed under a detention order, and Kouwounou was placed under judicial control.

ARTICLE 19 telephoned the lawyer for the three journalists, Mr. Elom Kpade, who denounced: “There is an absence of a legal basis, and there is a legal gap in this case. Journalists are bound by the press code in Togo and the government decriminalised press offenses in 2004.” Underlining the fundamentals of criminal law, he emphasised that: “the prosecutor cannot prosecute an individual if there is no legal basis for the offense for which the person is being prosecuted”.

“Despite the decriminalisation of press offenses, the Togolese authorities use other means to silence journalists and media critical of them,” said Fatou Jagne Senghore, Director for ARTICLE 19 West Africa. “ARTICLE 19 deplores the instrumentalisation of the judiciary and the repression of dissenting voices to stifle freedom of expression and the press.”

The Togo press code only provides for fines for press offences such as fake news and defamation. No prison sentences should be applied.

The Declaration of Principles on Freedom of Expression and Access to Information also specifically emphasises that public figures should tolerate more criticism than ordinary citizens and that penalties for defamation should never be so severe as to interfere with the right to freedom of expression. States are also reminded that custodial sentences for defamation violate the right to freedom of expression and that criminal defamation laws should be repealed. It further sets out: “States shall not infringe upon the right of individuals to seek, receive and impart information through any medium of communication and digital technologies.”

The African Court on Human and Peoples’ Rights and the ECOWAS Court of Justice unequivocally condemn the use of custodial sentences against journalists for defamation. This is complemented by serious concerns from the former Special Rapporteur on the promotion and protection of the right to freedom of opinion and expression, David Kaye, who in a report in 2017 called on states to ensure their obligation to protect and promote freedom of expression online, stressing that states may not interfere with, or in any way restrict, freedom of opinion.

ARTICLE 19 urges the Togolese government to respect its commitment to freedom of expression and press freedom.