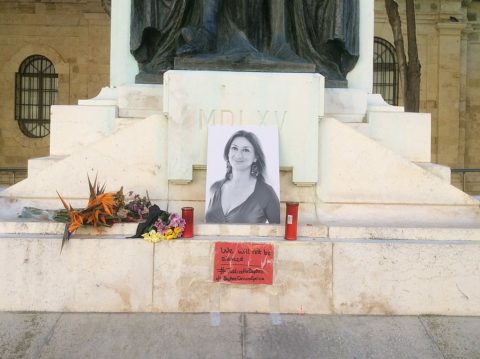 Today marks 38 months since Daphne Caruana Galizia was assassinated in Malta, yet barriers to justice remain

The undersigned organisations condemn the continued threats made by the Maltese Government against the independent public inquiry into the circumstances of the assassination of Daphne Caruana Galizia, and its three board members. The independence of the inquiry is vital and we call on the Government to uphold its commitments under the European Convention on Human Rights and ensure the inquiry is supported to fulfil its Terms of Reference free from all political threats and interference. We reiterate our full support for the public inquiry and its board members as they come under political attack.

On Tuesday, 15 December, the Maltese Prime Minister, Robert Abela told members of the board presiding over the public inquiry that they must “shoulder the responsibility of its decisions and the consequences these bring” after the inquiry panel ruled to extend the inquiry’s deadline in line with its terms of reference. Justice Minister Edward Zammit Lewis reiterated this threat, stating in Parliament that “If the public inquiry is not completed, the rule of the jungle will take over.” This followed a decree made by the members of the board of inquiry the previous day, following testimony from former OPM Chief of Staff, Keith Schembri where they stated that the inquiry would continue past the 15 December deadline set unilaterally by the Prime Minister and that “they would not accept any undue pressure or interference curtailing their brief.”

We believe that this extension is necessary to ensure all avenues of investigation into the circumstances of Daphne Caruana Galizia’s murder are exhausted. This includes examination of relevant data extracted  by Europol from electronic devices pursuant to the investigation, which is expected to be accessible to the Board by mid-January 2021. Even representatives of the Maltese state, including the Head of the Financial Crimes Unit and a member of the Homicide Squad of the Malta Police, have indicated in their testimony before the board that this data could “be substantially useful” to the inquiry.

It is not for the Government to say when the inquiry is complete, as stated by Daphne Caruana Galizia’s family in a recent statement and reiterated by her sister Corinne Vella this week, “It is only if the public inquiry completes its mission, as set out in its Terms of Reference, that lessons can be learnt from Daphne’s assassination, however uncomfortable this process may be for those who bear responsibility.”

This is the latest attempt of the Government to threaten the autonomy and independence of the inquiry, through undue influence, and to undermine the Terms of Reference that have been agreed on by all parties. When announcing that he was extending the inquiry until 15 December, Maltese Prime Minister Robert Abela stated that “I believe the inquiry has already had enough time to fulfil its work”. Prior to this, when this ‘one-off’ extension was announced by Abela in September, he outlined “reservations about the way in which the inquiry is failing to keep to the terms of reference given to it”. This is a misinterpretation of the public inquiry’s Terms of Reference, which clearly states that it is the inquiry board’s competence to decide when its mission is complete. This was further outlined by Parliamentary Assembly of the Council of Europe Special Rapporteur Pieter Omtzigt: “The prime minister of a government that is subject to inquiry should not seek either to determine the scope of that inquiry or to question its propriety. This is a blatant political interference with its work.”

The public inquiry must be guided by the evidence and need for investigation, not by arbitrary deadlines established by the Maltese Government, which is subject to the inquiry itself. Thirty-eight months after the murder of Daphne Caruana Galizia, the undersigned organisations reassert our commitment that a fully independent and transparent public inquiry is key to achieving justice for Daphne’s assassination and ensuring that this will never happen again.

This statement has been coordinated by the Media Freedom Rapid Response (MFRR), which tracks, monitors and responds to violations of press and media freedom in EU Member States and Candidate Countries. This project provides legal and practical support, public advocacy and information to protect journalists and media workers. The MFRR is organised by an consortium led by the European Centre for Press and Media Freedom (ECPMF) including ARTICLE 19, the European Federation of Journalists (EFJ), Free Press Unlimited (FPU), the Institute for Applied Informatics at the University of Leipzig (InfAI), International Press Institute (IPI) and CCI/Osservatorio Balcani e Caucaso Transeuropa (OBCT). The project is co-funded by the European Commission. www.mfrr.eu