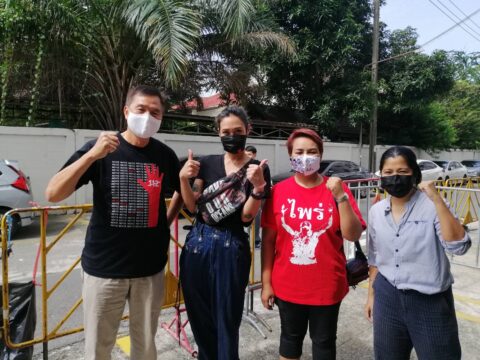 A new round of sedition and royal insult charges against prominent activists and human rights defenders, including an ARTICLE 19 consultant, demonstrates the Thai government’s utter disregard for its human rights obligations, said ARTICLE 19. The charges lodged against six individuals today appear to be less about the application of law to facts and more about the government’s desire to silence critical voices. Thai authorities should end all legal proceedings against individuals based on their exercise of the rights to freedom of expression and peaceful assembly and release all those detained on such grounds.

“The Thai authorities are clearly trying to stifle a vibrant discussion about the role of the monarchy in Thai politics by silencing those brave enough to voice a critique,” said David Diaz-Jogeix, ARTICLE 19’s Senior Director of Programmes. “Just two weeks ago, the Thai government paid lip service to freedom of expression at the Human Rights Council, but today’s events reflect the government’s true intentions and priorities.”

Today the public prosecutor charged six individuals in relation to their participation in a 29 November 2020 protest near the 11th Military Regiment headquarters in Bangkok. The protest was held under the moniker ‘Disarm Thai Feudalism,’ with many participants giving speeches focused on the role of the palace in Thai politics and governance.

Five of the individuals who gave speeches during the protest—Arnon Nampha, Parit Chiwarak, Somyot Pruksakasemsuk, Pimsiri Petchnamrob, and Natthatida Meewangpla—were charged with sedition and insulting the monarchy, also known as lèse-majesté. The sixth individual, Inthira Charoenpura, a well-known actress, was charged with sedition only. She did not give a speech but provided logistical support for the protest and encouraged participation on social media. Two additional individuals who gave speeches on 29 November 2020, Shinawatra Chankrajang and Promsorn Weeradhamjaree, were not able to report to the public prosecutor today but are expected to be charged with sedition and lèse-majesté at a later date.

Pimsiri Petchnamrob is an ARTICLE 19 consultant and a veteran Thai human rights defender. In her speech on 29 November 2020, Pimsiri did not explicitly comment on the monarchy or call for its reform. Rather, she spoke about the incompatibility of Thailand’s lèse-majesté provision with international law. In her speech, she quoted directly from a statement by then-UN Special Rapporteur on freedom of expression David Kaye, which asserted that lèse-majesté laws have no place in democratic countries. The papers filed by the public prosecutor indicate that Pimsiri’s commentary on the history of the lèse-majesté provision and quotation of David Kaye form the basis of the case against her.

Two of the accused, Arnon Nampha and Parit Chirawak, have previously been charged with sedition, lèse-majesté, and other crimes in multiple cases relating to their protest activities. The Bangkok Criminal Court accepted the accused’s request for release on bail on condition that they not participate in activities that defame the monarchy or leave the country without court permission.

The crime of sedition is set out in Section 116 of Thailand’s penal code and carries a penalty of up to seven years’ imprisonment. Section 112 of the penal code, Thailand’s lèse-majesté provision, makes it a crime to ‘insult or threaten the King, the Queen, the Heir-apparent or the Regent.’ Those convicted under Section 112 may be sentenced to up to 15 years’ imprisonment. The Attorney General’s Office launched numerous prosecutions under Section 112 after protesters increasingly began questioning the role of the monarchy last year. At least 154 individuals have been charged with lèse-majesté in the past year according to Thai Lawyers for Human Rights. Prior to November 2020, prosecutors had not charged anyone under the law for almost two years.

Authorities have ramped up pressure on some of those charged by denying bail. At least 25 individuals have been detained in relation to the pro-democracy movement since August, although most have been subsequently released. The six individuals currently detained are protest leaders facing multiple criminal charges in relation to speeches they made at protests. Parit Chiwarak, one of the activists charged today, currently faces 22 investigations or charges concerning alleged lèse-majesté offences.

ARTICLE 19 has repeatedly called for Section 112 to be repealed in its entirety. ARTICLE 19’s briefing, ‘Breaking the Silence: Thailand’s renewed use of lèse-majesté charges,’ details the authorities’ renewed use of Section 112—one of the strictest lèse-majesté provisions in the world—to suppress the pro-democracy protest movement. ARTICLE 19’s analysis, relying on repeated statements from human rights experts and bodies warning against lèse-majesté laws and calling on Thailand to repeal Section 112, explains how Section 112 prosecutions contravene Thailand’s obligations under international human rights law.

On 10 November 2021, the Human Rights Council examined Thailand’s human rights record during its third Universal Periodic Review. During the session, 12 states made recommendations for Thailand to amend Section 112 or restrict its use. Three states made similar recommendations concerning Section 116. In its report to the Human Rights Council, the Thai government stated that it ‘respects and protects freedom of expression and opinion’ and that ‘people…have been able to freely express their opinions in society,’ while also defending the enforcement of its lèse-majesté provision.

“The Thai government has abandoned its international human rights obligations and strained the interpretation of its own laws beyond logic, criminalising not only criticism of the palace but also critiques of the laws that protect the monarchy,” said Diaz-Jogeix. “This absurd case is an affront to both the individuals facing the prospect of years in jail as well as the international human rights system that Thailand claims to respect.”