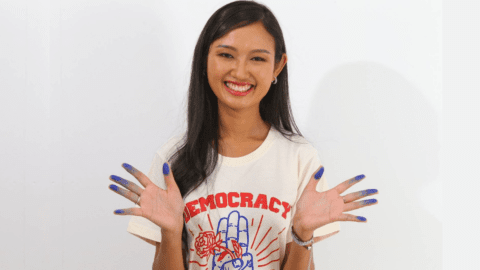 The investigation of prominent human rights defender Chonthicha Jangrew for allegedly insulting the monarchy is the latest blow to freedom of expression in Thailand, said ARTICLE 19. Authorities must immediately cease legal proceedings against Chonthicha and all other activists being investigated for their protest activities or for criticising government officials or royal figures. The 25 protest leaders and participants currently in pre-trial detention and the six individuals serving sentences for lèse-majesté offences should be immediately and unconditionally released.

“The government’s repeated attacks on compelling leaders in the pro-democracy movement underscore its deep intolerance of public criticism and dissent,” said David Diaz-Jogeix, ARTICLE 19’s Senior Director of Programmes. “Despite the palace’s far-reaching influence in economic and social affairs, authorities have aggressively applied Thailand’s lèse-majesté provision to ensure that public policy discussions do not touch on the interests of the monarchy.”

Authorities have summoned Chonthicha for questioning at Thanyaburi Police Station tomorrow, 24 November 2021, in relation to alleged violations of Section 112 of Thailand’s Criminal Code, which concerns insults to the monarchy. Chonthicha is a former student activist and a co-founder of the Democracy Restoration Group, which supports and trains young pro-democracy activists. Chonthicha is being investigated in relation to a speech she gave at an 11 September 2021 rally. The longstanding activist called for the palace to cut its budget and use the funds to support those affected by the COVID-19 pandemic. Authorities’ allegations that her speech insulted the monarchy form the basis of the investigation.

Authorities are also investigating eight other protesters for their involvement in the same protest, during which they called for the release of political prisoners. Authorities summoned them on 15 October 2021 for breaches of the Emergency Decree. Their investigations are ongoing, but no formal charges have been made.

Section 112 of Thailand’s Criminal Code imposes sentences of up to 15 years’ imprisonment for defaming, insulting, or threatening members of the monarchy. A two-year de facto moratorium on the use of Section 112 ended in November 2020, and in the past year prosecutors have charged at least 154 individuals under the section, according to Thai Lawyers for Human Rights.

25 individuals are currently being detained by authorities due to their participation in the pro-democracy protest movement over the past two years. Six of them, all protest leaders, are being held in pre-trial detention on charges under Section 112. These six activists each face multiple criminal cases relating to speeches they made at protests. Parit Chiwarak, for example, faces 22 investigations or charges concerning alleged lèse-majesté offences. Additionally, six individuals convicted of lèse-majesté offences relating to actions pre-dating the recent wave of protests remain behind bars.

ARTICLE 19 has repeatedly called for Section 112 to be repealed in its entirety. ARTICLE 19’s briefing, ‘Breaking the Silence: Thailand’s renewed use of lèse-majesté charges,’ explains that Section 112—one of the strictest lèse-majesté provisions in the world—is fundamentally incompatible with the right to freedom of expression. Laws offering special protection to heads of state and high-ranking public officials invert the fundamental democratic principle that the government and public figures must be subject to public scrutiny. Human rights experts and bodies have repeatedly warned against lèse-majesté laws and have called on Thailand to repeal Section 112. During Thailand’s third Universal Periodic Review, which took place on 10 November 2021, 12 states made recommendations for Thailand to reform Section 112 or review its use of the provision. Thailand has shown no intention of heeding those recommendations.