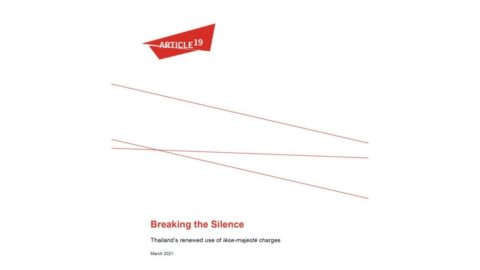 Last year, a vigorous pro-democracy protest movement swept across Thailand, led by a new generation of activists seeking political reforms. The protests were driven by frustration with Thailand’s military-backed government and the pervasive feeling among youth that they had been disenfranchised. The February dissolution of the Future Forward Party, which enjoyed widespread support among young voters, and the June disappearance of exiled pro-democracy activist Wanchalearm Satsaksit in Cambodia added fuel to the fire. As the protests grew in number and scope, the demands of the protesters coalesced around a new constitution, a new government, and an end to the harassment and intimidation of government critics. In a shocking departure from historical norms, thousands of Thai activists and protesters also began to openly question the role of the monarchy in Thai politics.

The Thai government, headed by former coup leader Prayuth Chan-o-cha, responded swiftly and sternly to the overt challenges to the political status quo. Authorities charged hundreds of protesters under a variety of laws, with some prominent activists being targeted in multiple cases and potentially facing decades behind bars. Authorities censored online expression, leaning on social media companies to remove critical content. Thai Police dispersed protesters forcefully with the assistance of water cannons and tear gas in October and November 2020.

In late 2020, authorities revived a dormant tactic – initiating legal action against individuals alleged to have defamed the monarchy under Section 112 of Thailand’s Criminal Code, Thailand’s notorious lèse-majesté provision. Since 2018, authorities had respected a de facto moratorium on the use of Section 112, which protects members of the Thai monarchy from insults, threats, and defamation.

The renewed use of Section 112 represents a grave threat to freedom of expression in the country. The provision has been interpreted in an extremely broad manner in the past and carries an extremely harsh penalty; each offence carries up to fifteen years’ imprisonment and a fine.

Since 24 November 2020, legal action has been initiated against at least 59 individuals, including many protest leaders, under Section 112. Authorities appear to be using the threat of prosecution under the provision to suppress the recent explosion of public discourse concerning the role of the monarchy in Thai politics. However, authorities are increasingly targeting expression only tangentially related to the monarchy, as well as commentary on the law itself.

This briefing sets out the international human rights law obligations relevant to lèse-majesté provisions. The briefing draws from media reporting, official documents, and other publicly available information, as well as the records of Thai Lawyers for Human Rights, which is providing legal representation to many of the individuals facing charges because of their protest activities. It then analyses the recent invocation of Section 112 to target pro-democracy protesters against Thailand’s international human rights law obligations. The briefing concludes by making recommendations to the Thai government.