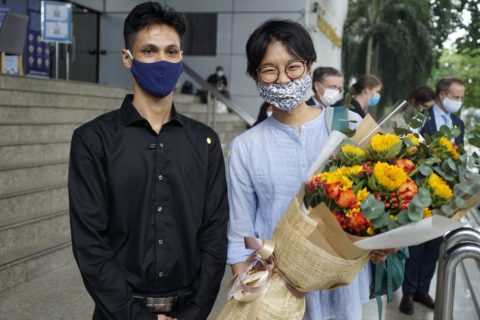 Thai authorities must take concrete steps to ensure that human rights defenders, journalists, whistleblowers, and others acting in the public interest are not targeted with baseless lawsuits by businesses or other actors, said ARTICLE 19. While ARTICLE 19 welcomes the acquittal of Nan Win and Sutharee Wannasiri on 8 June, the case against the two human rights defenders is only one of many similar cases. The acquittal after a lengthy trial underscores the need for legal reform.

“The acquittal is a welcome end to a trial that should have never seen the light of day. Nan Win and Sutharee Wannasiri were subjected to a vindictive campaign of harassment by a company that has repeatedly sought to use the judicial system to silence its critics,” said Matthew Bugher, ARTICLE 19’s Head of Asia Programme. “Human rights defenders should not be dragged through lengthy and costly legal proceedings simply because they reported on the abuses or misconduct of a company or powerful individual.”

On 8 June 2020, the Bangkok Criminal Court acquitted Nan Win and Sutharee Wannasiri in a criminal defamation case initiated by Thammakaset Limited Company. In October 2018, the company filed separate criminal complaints against the two human rights defenders under Articles 326 and 328 of the Criminal Code, concerning defamation and libel, respectively. The allegations stem from comments made by Nan Win during a press conference by human rights NGO Fortify Rights. The comments were subsequently included in a video produced by Fortify Rights and shared on Twitter by Sutharee Wannasiri, who was an employee of Fortify Rights at the time.

Journalists and human rights defenders in Thailand are routinely targeted with criminal defamation charges initiated by private actors as well as civil lawsuits. Thammakaset Limited Company alone has filed 38 criminal or civil complaints against 22 individuals in the past four years. All of these cases relate to accusations of labour rights violations, which have been substantiated by a court ruling requiring the company to pay 1.7 million Thai Baht in compensation. Among the accused are former Thammakaset employees, labour rights activists, a journalist, an academic, a former commissioner from the National Human Rights Commission of Thailand, and two additional employees—one current and one former—of Fortify Rights.

In December 2018, Thailand’s National Legislative Assembly amended the Criminal Procedure Code to include two provisions that could be used to dismiss criminal cases against those acting in the public interest. Section 161/1 provides courts the power to dismiss cases filed by private parties with the intention to “harass or take undue advantage of a defendant, or to procure any advantage to which the complainant is not rightfully entitled”. Section 165/2 allows defendants to submit evidence during a preliminary hearing showing that a case “lacks merit”.

Thailand’s National Action Plan on Business and Human Rights sets combatting Strategic Lawsuits Against Public Participation (SLAPP) as a major priority for the government, specifically mentioning the prosecution of human rights defenders. It also cites the amendments to the Criminal Procedure Code as demonstrating the government’s commitment to addressing this problem. However, to date, judges have been reluctant to apply Sections 161/1 and 165/2. ARTICLE 19 is not aware of any cases in which these sections have been used to dismiss a case.

While the application of Sections 161/1 and 165/2 to dismiss cases against human rights defenders and others acting in the public interest would be a positive step, more far-reaching reforms are necessary. The Thai government should decriminalise defamation, including by repealing or amending Sections 326-333 of the Criminal Code and Section 14 of the Computer Crime Act. There is growing international consensus in favor of decriminalising defamation, as recognised in the UN Human Rights Committee’s General Comment 34, which emphasised that custodial sentences are never an appropriate penalty for defamation.

“The Thai government has admitted that retaliatory prosecutions initiated by businesses against their critics are a major problem,” said Bugher. “Now it is time to act. The problem will not be solved until the government reforms the laws that give rise to these spurious cases.”