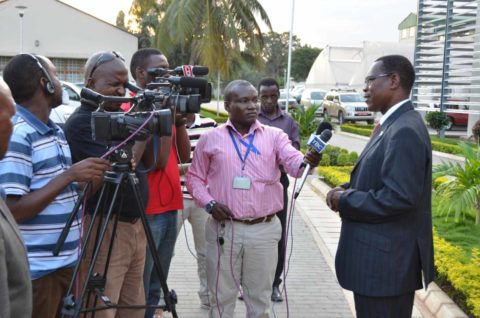 ARTICLE 19 is extremely concerned about the shrinking civic space in Tanzania ahead of the elections on 28 October 2020. The government is not only cracking down on media, but also undermining the ability of political parties to campaign and seek justice. Since January 2019, the government has amended the Political Parties Act, restricting the right to freedom of assembly, and the Basic Rights and Duties Enforcement Act.

‘The media is a critical player in elections. People use the media to find information about the candidates’ political agendas and to debate on various public issues. Perhaps even more important is that media acts as a watchdog over the administration of elections. But the crackdown on journalists and dissenting voices has effectively led to self-censorship of the media. The President should therefore make every effort to ensure free media before, during and after the elections in Tanzania.”

“The government has unjustifiably limited free speech and freedom of the media, which is effectively resulting in self-censorship of the media. On top of that, citizens more and more lack access to information and political parties are restricted in their freedom of association. This is a dangerous combination, especially as Tanzania will hold its elections next month.”

ARTICLE 19 Eastern Africa urges the government of Tanzania to repeal the laws that contravene free speech, association and assembly and put an end to harassment of journalists and media stations to promote free flow of information ahead of elections.

Crackdown on media and NGOs

ARTICLE 19 has documented an increase in restrictions of the media and NGOs perceived to be critical of the government in recent months.

The amendment of the Electronic and Postal Communications (Online Content) Regulations  has only exacerbated the crackdown on media as it criminalises free speech, prohibits publication on a wide range of issues and gives the regulator sweeping powers to suspend media outlets and journalists.

In January 2019, the Parliament passed amendments to the Political Parties Act which creates a very restrictive operating environment for political parties, undermining freedom of association:

The act violates the African Charter and the International Covent on Civil and Political Rights as well as the Constitution, which all provide for the right to freedom of expression and association.

On 10 June 2020, the Parliament of Tanzania, in contravention of the spirit of the Constitution of Tanzania and international human rights laws on access to justice, passed amendments to the Basic Rights and Duties Enforcement Act. The act now requires the claimant to demonstrate that an alleged contravention of the Constitution affects them personally; failure to which a case is no longer admissible in court. This violates article 26 (2) of the Tanzania Constitution which provides that, ‘Every  person  has  the  right,  in  accordance  with  the  procedure provided by law, to take  legal action to ensure the protection of this Constitution and the laws of the land.’ The new provision in the law threatens public interest litigation in the country and limits civil society organisations to take cases to court. In November 2019, Tanzania had already withdrawn the right of individuals and NGOs to institute cases against it directly before the African Court on Human and Peoples’ Rights.

“Access to justice is a fundamental component of rule of law. It ensures that there is redress for violation of rights. Public interest litigation not only advances human rights but also raises issues of public concern.  And importantly, it promotes accountability of the government. Laws that narrow the locus for public interest litigants or completely block access to judicial bodies is an affront to justice. The new laws are likely to further compound the vulnerability of minority groups in Tanzania,” said Mugambi Kiai, Regional Director, ARTICLE 19 Eastern Africa.

The amendment to the Basic Rights and Duties Enforcement Act further prohibits the suing of the President, Vice President, Prime Minister, the Speaker, Deputy Speaker and the Chief Justice. All suits against the top officials must now be brought against the Attorney General. The provision gives blanket immunity to the top officials, even for acts that may have been committed ultra-vires or in complete disregard of the Constitution. This has the risk of perpetuating impunity among key decision makers in the country, to the detriment of the citizens.