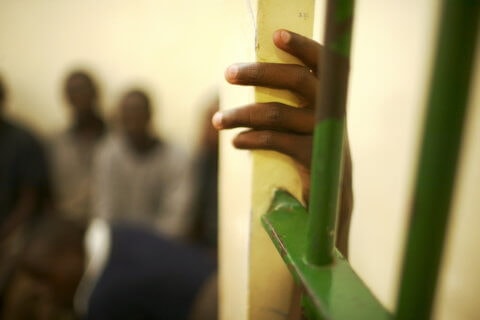 Prisoners sit in a cell. They are being held temporarily until they go to face trial.

ARTICLE 19 is concerned about the detention and charging of Freeman Mbowe, Chairman of The Party for Democracy and Progress (Swahili: Chama cha Demokrasia na Maendeleo (Chadema), and six of his colleagues on terrorism-related offences. The organisation calls for their immediate release.

On 21 July 2021, police arrested Mbowe together with 10 other members of the Chadema party,  the main opposition party in Tanzania. The arrest took place before a planned conference by Chadema to demand constitutional reforms. Mwanza provincial authorities had banned the conference under the guise of containing the spread of coronavirus. Police arrested the men at the Tourist Hotel in the Kitangiri area where the Chadema conference was to take place and held them for questioning over allegations of terrorism and an alleged plot to kill government leaders.

According to reports, on 26 July 2021, Mbowe was charged at Dar es Salaam’s Kisutu Resident Magistrate’s court along with six of his colleagues for terrorism-related crimes. Regional director, Mugambi Kiai said:

“We believe that the cases brought against Mbowe and the other members of Chadema arrested with him is a classic example of state machinery being used to intimidate and silence political opposition and freedom of expression. Tanzanian authorities must stop narrowing the space for free speech, immediately release Mbowe and drop all charges against him or ensure that they are heard in a trial meeting international fair trial standards”.

The latest arrests and prosecution raises concerns that the Tanzanian government may be backtracking on recent promises of reform.

When President Samia Suluhu came into power following the death of President John Pombe Magufuli, she took measures that offered a ray of hope in regard to strengthening Tanzania’s human rights record. In her inaugural speech to parliament, she committed to defending democracy and fundamental freedoms. In the following weeks we witnessed some positive developments, for instance on 6 April 2021, she called for the lifting of bans on all media houses in the country including those placed on some media houses for their reports on COVID 19 at a time when the government was denying the presence of COVID 19 and COVID-related deaths in the country. On 20 April 2021, government authorities communicated the decision to unfreeze the bank accounts of the Tanzania Human Rights Defenders Commission (THRDC) which had been frozen since August 2020 to pave the way for what the Magufuli government termed as ‘investigation into alleged suspicious activities’.

Under the leadership of the late President John Magufuli from 2015, human rights in Tanzania deteriorated dramatically, particularly raising concerns regarding freedom of expression. Police arbitrarily arrested and detained journalists, activists, and scores of opposition party leaders and supporters. Laws like the 2015 Cybercrimes Act and the 2016 Media Services Act were used to censor and/or crackdown on opposition politicians, journalists, and activists.

These arrests of Chadema members are inconsistent with Tanzanian’s international obligations, including those under the International Covenant on Civil and Political Rights (ICCPR), which the country has signed onto. They are also inconsistent with the country’s constitution which calls for the respect and protection of the freedoms of association, assembly and expression.

We call on President Suluhu to stop the crackdown on free expression and continue the reform agenda. In particular, we reiterate our call for the authorities to drop the charges against Mbowe.