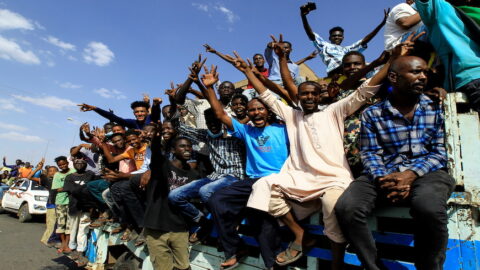 Protesters against the Sudanese military's seizure of power and ousting of the civilian government, Khartoum, Sudan, 30 October, 2021. Mohamed Nureldin/REUTERS

ARTICLE 19 strongly condemns the crackdown on protesters by Sudanese security forces, which resulted in the deaths of at least 11 people and 150 people sustaining injuries. We are also concerned with the ongoing disruption of Internet services in Sudan.

Following a military coup by General Abdel Fattah Burhan on 25 October, media reports indicated that there was a disruption to Internet services in Sudan after protests broke out in several cities including the capital city, Khartoum. The protesters demanded a return to civilian rule after the military coup leader General Abdel Fattah Burhan dissolved the cabinet of ministers and the Sovereign Council, arrested Prime Minister Abdalla Hamdok and several other senior officials, and called a state of emergency. The Sovereign Council is a power-sharing arrangement between military and civilian leaders that had been established to guide the country to democracy following the overthrow of Omar al-Bashir in a popular uprising in 2019.

As the news of the coup spread, reports of protests taking place across the country and being met by a violent crackdown emerged. Soldiers from the Sudanese Armed Forces (SAF) and the Rapid Support Forces (RSF) reportedly responded using live ammunition, killing 11 protestors and injuring a further 150, as well as arresting local protest organisers. Footage shared on social media appears to show Sudanese security forces opening fire on protesters.

“The military authorities must refrain from the use of lethal force as a response to protests. The right to life and peaceful protest must be respected and we remind them that under international law, lethal force can only be used when strictly unavoidable in order to protect life and when all other means are insufficient to achieve a specific objective,’’ said Mugambi Kiai, Regional Director at ARTICLE 19 Eastern Africa.

Following the protests, the Internet was shut down on 25 October, affecting mobile and fixed line connectivity in the country. Although services were briefly restored on Tuesday 26 October, the Internet was soon shut down again and remained unavailable on Monday,1 November. Experiences across the region show a direct correlation between Internet shutdowns and human rights violations. In July 2021, the UN Human rights Council adopted a resolution declaring that Internet shutdowns are a violation of international human rights law.

“Internet shutdowns restrict the free flow of information during critical times including the ability of citizens to raise alarm on human rights violations. The military authorities must fully respect the international human rights treaties signed by Sudan, which guarantee online and offline freedom of expression and access to information,” added Mugambi Kiai.

Background to protests in Sudan

Sudanese security forces have a well-documented record of abuse in the context of protests. The period during and after the protests calling for the ouster of Omar Al Bashir in 2018 and 2019 was characterised by security forces routinely using live ammunition against protesters, crackdown on opposition leaders, journalists and activists and disruption of Internet services.

The most severe crackdown was in June 2019, when protesters organised a sit-in outside the army headquarters in Khartoum asking for civilian rule and security forces responded by indiscriminately opening fire and reportedly killing at least 120 protesters and injuring hundreds.

Once again the authorities in Sudan shut down the Internet and  destroyed electronic devices of protesters to keep them from documenting and sharing human rights violations. The shutdown also made it difficult for the media to report on the unfolding situation in Sudan at the time.

The government of Sudan is a signatory to several international human rights treaties that guarantee online and offline freedom of expression and access to information, as well as the right to protest. We urge the Sudanese authorities to ensure full restoration of information and communication services in Sudan and respect  human rights at this critical time, as well as conduct an independent investigation into the killings and release those arbitrarily detained.