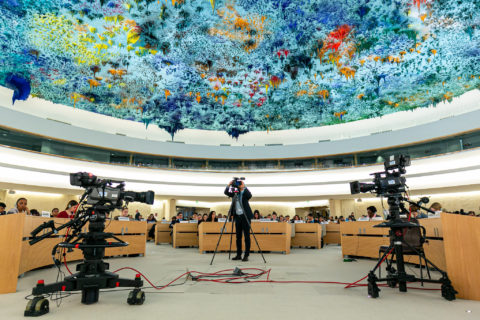 ARTICLE 19 welcomes the adoption of a resolution on “the promotion, protection and enjoyment of human rights on the Internet” at the UN Human Rights Council. The resolution – led by a core group of Brazil, Nigeria, Sweden, Tunisia and the United States, and co-sponsored by 70 countries from all regions – was adopted by a vote with strong support at the Council on 13 July 2021. This is now the fifth in a series of resolutions with the same title, the first of which was adopted in 2012.

This iteration of the resolution has the overarching thematic theme of bridging digital divides, an issue which has become more important than ever amid COVID-19. The resolution builds on and consolidates international human rights standards related to the theme, with language on issues including Internet access, shutdowns and online censorship, net neutrality, and encryption. The resolution also reaffirms the landmark declaration first made in previous iterations of the resolution that “the same rights that people have offline must also be protected online”.

While we regret that the resolution did not pass by consensus, unlike previous iterations of the resolution, it nonetheless passed with 43 votes in favour and 0 votes against adoption, with 4 abstentions. This shows ongoing and overwhelming support for the commitments of the resolution.

We now call on States to prioritise action at the national level to implement the commitments of the resolution.

Given the thematic focus of the resolution on bridging digital divides, the resolution consolidates and reinforces commitments on enhancing Internet accessibility and affordability. As examples, it calls on States to bridge the digital divide by “adopting national Internet-related public policies that have at their core the objective of universal access” and “applying a comprehensive human rights-based approach in providing and expanding access to information and communications technology”. It also introduces new language which “recognises the increased importance of the Internet in the context of the COVID-19 pandemic” and, in this regard, calls on all stakeholders to “promote affordable and reliable connectivity”.

The Internet has become essential for most of us in our everyday lives. It enables us to work, communicate and access important services. Increasingly, it is a key enabler for the exercise and enjoyment of many human rights, in particular the right to freedom of expression and information. However, a lack of adequate infrastructure or connectivity usually leaves behind the poorest communities, and the digital divide shows its discriminatory effects in all its strength.

We urge States to implement these commitments by taking concrete measures to expand Internet access and affordability, such as by promoting infrastructure sharing and open spectrum management and by creating an enabling and inclusive regulatory environment for small and non-profit operators. We also encourage the core group of go further in future iterations of the resolution by explicitly mentioning the concrete measures mentioned above to further facilitate the bridging of digital divides.

The resolution unequivocally condemns Internet shutdowns and online censorship and calls on governments to cease such measures. It also makes progress by mandating the Office of the High Commissioner for Human Rights to prepare a report on Internet shutdowns, analysing their causes, their legal implications, and their impacts on a range of human rights. This is the first time the resolution makes an explicit reference to Internet shutdowns, joining other resolutions which are contending with this issue, such as the recent resolution on the freedom of opinion and expression.

Worldwide, there is a growing trend of States resorting to Internet shutdowns and other censorship measures, such as website blocking and filtering, network throttling, or disruptions to mobile services, particularly during sensitive moments like protests and elections. These measures ultimately stifle the right to freedom of expression, stop the free flow of information, and conceal grave human rights violations.

We now call on States to immediately and unconditionally cease these violations of international human rights law.

The resolution makes strong normative progress by becoming the first to address the issue of net neutrality. It calls upon States to “ensure net neutrality, subject to reasonable network management, and prohibit attempts by Internet access service providers to assign priority to certain types of Internet content or applications over others for payment or other commercial benefits”. This echoes a recommendation previously made by the former Special Rapporteur on the right to freedom of opinion and expression in a report on digital access providers.

We have long asserted that net neutrality – the principle that all network traffic should be treated equally regardless of its origin, destination or service provider – is a key prerequisite to ensuring the equal and non-discriminatory exercise of the right to freedom of expression and the free flow of information online. Without it, providers can use their control over Internet infrastructure to block, slow or prioritise access to certain forms of content over others.

We now urge States to take heed of this new commitment, including by passing laws which ensure that Internet service providers fully respect net neutrality.

The resolution recognises that “technical solutions to secure and protect the confidentiality of digital communications, including measures for encryption and anonymity, are important to ensure the enjoyment of all human rights offline and online”. This language mirrors progress made by other resolutions on this issue, such as the recent resolution on privacy in the digital age.

The availability of measures for encryption and anonymity is an essential prerequisite for safe and secure Internet access, especially for human rights defenders, journalists and other groups or individuals who face persecution for expressing dissent or political opposition. As such, they are fundamental as part of broader measures to bridge digital divides.

We call on States to not only refrain from interferences with these technical solutions, but to pass laws which recognise that individuals are free to protect the privacy of their digital communications through such technologies. We also urge the core group to ensure that encryption is addressed in operational paragraphs in the future, in line with resolutions on privacy in the digital age, as it has been in previous versions of the resolution.

China called the resolution to a vote during its adoption, meaning it is the first iteration of the resolution to not pass by consensus. It nonetheless passed with overwhelming support, with 43 votes in favour and 0 votes against adoption, with 4 abstentions.

During the final stages of negotiations, China put forward three amendments to the text which were later withdrawn. This included two amendments to remove references to a “human rights-based approach” and one amendment which emphasised the need to address “the spread of criminal information and disinformation, which can be designed to incite to violence, hatred, discrimination and hostility, inter alia, racism, xenophobia, negative stereotyping and stigmatisation”.

The latter amendment in particular risked critically undermining the text. The term “criminal information” is unduly broad and vague and ultimately leaves it up to States to determine what exactly is “criminal”, which is too often civil society actors expressing dissenting views protected by their right to freedom of expression. Moreover, while we share concerns about hate speech, concepts like “negative stereotyping” or “stigmatisation” do not necessarily reach the threshold of incitement defined by international law and could cover protected forms of speech.

China withdrew all three of its amendments but called the whole text to a vote. While it is unfortunate that the resolution did not pass by consensus given the importance of its content, we welcome that the core group did not aim to secure consensus through significant compromise which would weaken the text, including by conceding to hostile amendments. We reiterate that consensus should not come at the cost of rolling back international human rights standards.

ARTICLE 19 welcomes the efforts of the core group to advance protections for the right to freedom of expression online in this resolution. The resolution plays a central role in normative standard setting and sets out an important agenda for bridging digital divides and ensuring the promotion, protection and enjoyment of human rights on the Internet.

We call on all States to implement these renewed commitments to their full extent. We also encourage States to collaborate with and support civil society in its efforts to bridge digital divides and ensure the full enjoyment of human rights online.