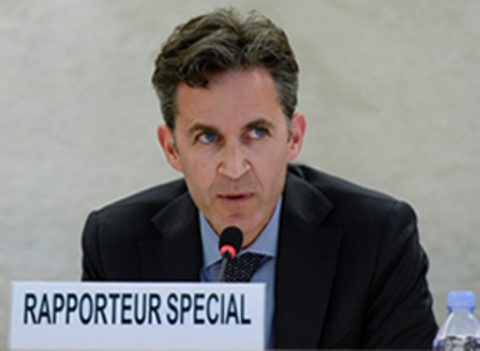 “The world needs international organisations and multilateralism now more than ever. Ensuring our international institutions, including the UN, are robust and able to meet the global challenges we face, requires that they practice what they preach on good governance,” said Thomas Hughes, Executive Director of ARTICLE 19.

“The UN must open up to the public and institute access to information policies to end what is a widespread culture of secrecy, or risk bending its credibility to breaking point. This shift would not only be in the public interest, but in the interest of the UN itself, and the interests of States that support international cooperation,” he added.

In the report to the UNGA’s Third Committee, which handles issues of human rights, the Special Rapporteur characterises the absence of a UN-wide access to information policy as “intolerable”. Citing ARTICLE 19’s 2017 report on progress in the implementation of the Sustainble Development Goals (SDGs), which found that 118 countries have adopted comprehensive laws or policies to further the right of access to information, he notes that in comparison, positive examples from international organisations are few and far between. Those that do have policies include the United Nations Development Programme (UNDP) and the United Nations Environment Programme (UNEP).  The Special Rapporteur encourages that their experiences be learned from, and good practices identified and replicated across the UN system.

Significantly, the report asserts that the right of access to information, guaranteed under Article 19 of the Universal Declaration of Human Rights and under innumerous binding international and regional human rights instruments, should apply to international organisations as much as it does to States. As noted by the Rapporteur, “There is no principled reason why intergovernmental organizations should adopt access-to-information policies that vary from those adopted by States.” States are obliged by international agreements to “not stand in the way of members of the public receiving information from organisations like the United Nations” and should “create enabling environments” to ensure access.

The Special Rapporteur’s rationale for this is clear: international organisations like the UN perform public functions, and their decisions and actions impact people’s daily lives. They must therefore be open to the public, and accountability mechanisms must be in place to ensure that they operate in the public interest. This transparency is also essential for their credibility with the public.

The Special Rapporteur warns that without mechanisms for public accountability, which rely on the public’s right to access information, wrongdoing and corruption go unchecked, and poor governance becomes more and more institutionalised. While the temptation may be to maintain opacity to avoid embarrassment and scandal as far as possible, the costs associated with secrecy are much more considerable.

Further, access to information is inextricably linked to the right to public participation, and is a pre-condition for ensuring civic space within international organisations, where physical access to institutions and the right to have the voices of civil society heard and listened to is constantly under attack.

The report notes the significance of Goal 16 of the SDGs, which calls on States to implement public access to information laws and policies, in recognition of the importance of such mechanisms in ensuring public engagement, effectiveness and accountability. Paradoxically,  if a person were to request from the UN access to information on how it was facilitating the implementation of Goal 16, no institution-wide policy would guarantee a response and few bodies would be required to answer.

As noted by the Special Rapporteur, these assertions are not novel. The application of a right of access to information held by international organisations is strongly implied, if not assumed, in numerous UN Human Rights Council resolutions and reports of the Office of the High Commissioner for Human Rights (OHCHR). It is therefore unfortunate that the OHCHR is among the UN bodies listed as not having an access to information policy in place. The former Special Rapporteur on freedom of assembly and association, Maina Kai, has also previously called for greater access to information in his report on public participation in inter-governmental organisations. Unfortunately, there has been little progress since then.

This latest report provides considerable detail on the kind of binding transparency policies international organisations should adopt, which are based on the international standards that States are required to follow to implement Article 19 of the ICCPR. Importantly, this includes a presumption of disclosure, very narrow grounds upon which requests for access can be refused, and a need to provide reasons for any refusal, with the possibility of complaints and appeal. Information of public interest should be actively disclosed in a timely manner. Supplementing this, and essential for the UN in particular to take note of, is the need for comprehensive protections for whistleblowers. These policies must be designed with the meaningful participation of stakeholders.

ARTICLE 19 welcomes the Special Rapporteur’s report, and calls on international organisations, member states, and civil society organisations, to heed the recommendations in it. As calls for reform at the UN grow louder, it is essential that action is taken on issues of transparency and accountability to ensure its effectiveness now and in the future.