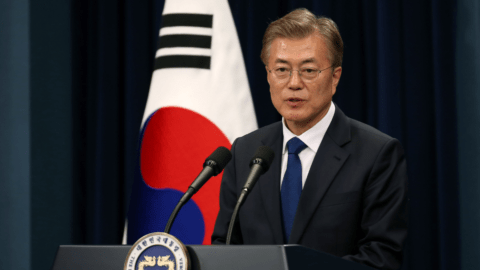 Proposed amendments to the Act on Press Arbitration and Remedies for Damage Caused by Press Reports (Press Arbitration Act) would severely infringe the rights to freedom of expression and information and discourage critical reporting by the media, said ARTICLE 19. Lawmakers should reject the bill—which imposes punitive damages for ‘fake news’ that causes harm—at tomorrow’s plenary session of the National Assembly.

“The legacy of this amendment, if passed, will be the injury it does to independent journalism and critical reporting,” said Matthew Bugher, ARTICLE 19’s Head of Asia Programme. “Misinformation is a serious problem but must be addressed through laws and policies that support rather than undermine a vibrant media environment.”

Tomorrow, the National Assembly will decide whether to enact an amendment to the Press Arbitration Act that will impose new civil penalties for ‘false and manipulated reporting.’ The amendment, proposed by the National Assembly Culture, Sports and Tourism Committee, will impose punitive damages of up to five times the amount of actual damage caused by a ‘fake news’ report published by a press organisation, internet news service, or multimedia broadcasting operator. The amendment bill has been fiercely criticised by opposition lawmakers, the media sector in South Korea and globally, as well as local and international civil society organisations, who raised concerns that it would infringe press freedom.

ARTICLE 19 argues that this vague and overbroad language threatens to stifle reporting critical of government authorities and would likely have a chilling effect on the media. It is inconsistent with South Korea’s human rights obligations and international standards on freedom of expression.

Article 19 of the International Covenant on Civil and Political Rights (ICCPR), which enshrines the rights to freedom of expression, dictates a narrow three-part test for restrictions of freedom of expression to be permissible. Any restriction on expression must be (1) provided by law; (2) in pursuit of a legitimate aim; and (3) necessary and proportionate to that aim. The bill fails the first prong of the three-part test, the principle of legality, as the vague definition of ‘false or manipulated reporting’ is likely to make it difficult for members of the media to know when they are not in compliance with the law.

Four special mandates on freedom of expression made it clear in their 2017 joint declaration that ‘general prohibitions on the dissemination of information based on vague and ambiguous ideas, including ‘false news’ or ‘non-objective information’, are incompatible with international standards for restrictions on freedom of expression.’ They further asserted that ‘the human right to impart information is not limited to “correct” statements, [and] that the right also protects information and ideas that may shock, offend or disturb.’

Further, under international freedom of expression standards, states may protect people from false statements of fact that cause damage to their reputation. However, nobody should be liable for a statement of opinion, defined as a statement that cannot be shown to be true or false or that cannot reasonably be interpreted as stating a fact, such as rhetoric, satire or jest. Opinions are by definition subjective in nature and courts should not judge whether or not it is appropriate to articulate them. Furthermore, no one should be required to prove the truth of a statement of opinion or value judgement. This is not the case with the proposed bill.

The bill extends punitive damages for ‘false or manipulated reporting’ to ‘internet news service providers’ and ‘internet multimedia broadcasting business operators.’ By holding third parties responsible for merely aggregating or mediating news reports deemed to be false or manipulated the amendment would violate international standards concerning intermediary liability. Korean law already provides for mandatory notice and takedown requirements, which have resulted in hundreds of thousands of otherwise lawful postings being taken down each year.

The amendment bill would establish grossly disproportionate punitive damages for ‘false or manipulated reporting.’ The bill states that ‘the court may assess compensation up to five times the damages’ if such reporting causes property damage, infringes on personal rights, or causes emotional distress. A maximum penalty of five times the actual financial loss is clearly excessive and by definition disproportionate to the harms suffered. In General Comment 34, the UN Human Rights Committee warned States to avoid excessively punitive measures associated with defamation provisions. Punitive damages are only appropriate to compensate for harm to reputation in certain exceptional circumstances. The broad language of the amendment does not implicate any concerns that would merit such exceptional treatment. Moreover, South Korea already possesses extensive civil and criminal defamation legislation which provides sufficient redress for harms suffered due to false claims, thus making the proposed amendment unnecessary.

The proposed bill includes a mens rea requirement of ‘clear intent or gross negligence.’ The amendment specifies that a court may infer such intent or gross negligence from ‘retaliatory or repeated causation of damages,’ ‘causation of irrecoverable damages,’ republication without sufficient fact-checking, or misrepresentation via graphics or headlines. This formulation of intention or gross negligence is exceedingly broad, permitting indirect intention and failing to require malice aforethought. Individuals could be held liable for publishing incorrect information as a joke or without knowledge of its falsity. Holding individuals responsible for the republication of false content without sufficient fact-checking extends liability to those beyond the original author or publisher.

Impact on freedom of expression

The overbroad nature of the proposed bill could impose penalties on speech protected under international law. The proposed amendments also undermine the free flow of information, unduly fettering the right to information guaranteed under the ICCPR. If the bill is passed it will likely lead to a sharp spike in self-censorship by media outlets and journalists. The steep penalties associated with the new ‘fake news’ provision will act as a significant economic disincentive against critical and investigative reporting, including reporting concerning the government.

“The amendment could have an alarming impact on people’s access to information in South Korea,” said Bugher. “Legislators must recognise that a free press is a partner in combatting the spread of misinformation and reject this excessive and unnecessary bill.”