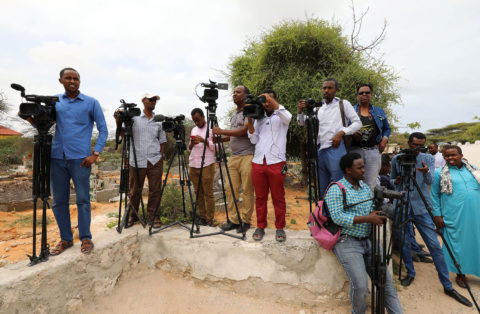 ARTICLE 19 Eastern Africa is calling on the government of Somalia to release journalists imprisoned for exercising their right to free expression, and to cease dangerous internet shut-downs.

In a recent case concerning the arrest of Abdiaziz Ahmed Gurbiye of Goobjoog Media Group on 14 April 2020 for spreading false news that “offended the honour of the President”, the journalist was convicted and sentenced on 29 July 2020 based on a Facebook post he had made criticizing the government’s response to the coronavirus pandemic. [1]

ARTICLE 19 has looked into a string of other cases in recent months:

Mohamed Abdiwahab Nuur of Radio Hiigsi was arrested on 7 March 2020 and reportedly held incommunicado to date. [2]     In February, Abdiwali Ali Hassan, a freelance journalist, was killed by unknown assailants in a shooting believed to have been related to his work. And in December 2019, City FM journalists were arrested and the media station closed indefinitely on claims of spreading misinformation.

‘Almost all attacks on journalists happen with impunity. The government must step up to ensure they take measures to prevent attacks, prosecute suspected perpetrators in order to bring justice for the victims. Unfortunately, the threats and attacks on journalists and media practitioners have led to self-censorship impeding the free flow of diverse information.

‘Reporting on the coronavirus pandemic at this challenging time is essential: people need adequate and timely access to information. Moreover, such attacks have the effect of stifling free speech on a fundamental public issue.   Governments everywhere should be as transparent as possible in the measures they are taking to combat the Coronavirus crisis while proactively providing information to the public, rather than stifling engagement with the issues.’’

Attacks on journalists are hampering the free flow of information but so too is disruption to the internet.  The shutdown which happened from Sunday 26 July to Monday 27 July 2020 is of great concern to ARTICLE 19 as it came shortly after the removal of Somalia’s Prime Minister Hassan Ali Khaire, following a vote of no-confidence by Parliament on 25 July 2020.

The public rely heavily on the Internet for information about government measures to combat the pandemic, and general information to protect them from the risk of infection and where to access medical help.

“Disrupting access to the Internet during the ongoing Coronavirus pandemic is dangerous, and disrupts individuals’ access to timely, factual and correct health information online about the global pandemic,” said Mugambi Kiai,

“The Internet is an enabler of numerous rights, including access to information. ARTICLE 19 Eastern Africa hopes that the government will not repeat this again, especially considering the postponed elections, which were scheduled to take place on 27 November 2020 but have been  postponed again to next year.”

[1] Gurbiye was released on bail and then warned not to post critical content. However early July he was summoned on charges of “insult[ing] a political, administrative or judicial body,” and “publication of false news” under the criminal code. He was expected to appear in court on July 7 and has now been formally charged .

[2] The Somali Journalists Syndicate submitted a petition to the United Nations Working Group on Arbitrary Detention on  behalf of Abdiwahab Nuur on July 27 2020. He was arrested at first in February and released in March on condition he would not speak about his detention. He was subsequently arrested on March 7 and said to have appeared before a military court on June 7 but neither family nor lawyer had access to him.  A Military court has called on the Somali National Intelligence Security Agency to bring official charges against him but it appears not to have done that at the time or writing.