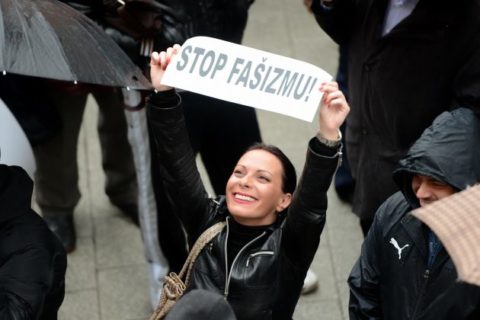 Journalist Ana Lalic was arrested on 1 April 2020 in the town of Novi Sad in the Serbian region of Vojvodina, after her reporting on the coronavirus pandemic. ARTICLE 19 is calling for the investigation against Lalic to be dropped and the withdrawal of new regulations that limit the distribution of information on the pandemic to come only from the Prime Minister’s office and other selected authorised bodies in Serbia.

On 1 April, Lalic was kept in police custody after reporting on the inadequate working conditions and lack of basic medical equipment for hospital staff in the Clinical Centre of Vojvodina. On the same day, Lalic published her article “KC Vojvodina before firing: No protection for nurses” on the news website Nova.rs, where she works as a journalist. According to her account, Lalic asked for a statement from the hospital’s staff, who refused to provide any testimony in relation to the clinic’s facilities. As a result of her article, the hospital reported Lalic to Vojvodina police station and filed a complaint against her for damaging their reputation and upsetting the public. According to her lawyer, Lalic was arrested at her home late in the night, after the police searched her house and confiscated some of her equipment. The journalist was placed in detention on suspicion of publishing texts that cause panic and disorder and subsequently released in the morning of 2 April after being questioned by police officers.

Lalic is the first journalist who has been arrested in Serbia after the introduction of a new regulation on 28 March 2020 that centralises the distribution of information on the coronavirus to the Prime Minister’s office or individuals authorized by the Crisis Management Taskforce in Serbia. This regulation was introduced after a state of emergency was declared to manage the current global health crisis. The Prime Minister of Serbia, Ana Brnabic, has said that the decree will be withdrawn at the express request of Serbian President Aleksandar Vucic,   after pressure received from international organisation, including the OSCE Representative on Freedom of the Media, Harlem Désir, and the Head of the OSCE Mission to Serbia, Andrea Orizio, who highlighted its breach of international human rights standards on freedom of expression.

According to Sarah Clarke, Head of Europe and Central Asia at ARTICLE 19, “the Government of Serbia must develop policies and responses to the coronavirus outbreak that embrace freedom of expression and access to information”.

ARTICLE 19 recently published a briefing on tackling misinformation in the framework of the COVID-19 pandemic, calling for approaches to misinformation and ‘hate speech’ that rely on censorship and criminal sanctions to be replaced with those emphasising transparency and media freedom.