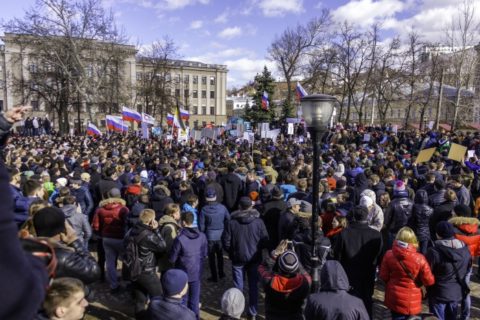 On 27 July 2019, hundreds of demonstrators were arrested and detained in Moscow amid an escalating repression of the right to protest. The peaceful demonstrations broke out in response to a decision by the electoral commission to not allow a number of independent candidates to stand in a September election for Moscow’s municipal parliament. Protesters were confronted by police and the National Guard who declared the protests ‘unauthorised’ and began to detain individual protesters, taking them to detention centres by buses. According to OVD-Info, at least 152 people have spent two nights in detention; some of who are already facing charges of ‘Violating the Established Procedure for Arranging or Conducting a Meeting, Rally, Demonstration, Procession or Picket.’

“These arrests and detentions represent a serious escalation in Russia’s repression of peaceful dissent, a right which is protected under international law,” said Sarah Clarke, Head of Europe and Central Asia at ARTICLE 19. “Russia must immediately release demonstrators and drop all charges against them.”

ARTICLE 19 urges the Russian authorities to:

What are the applicable international standards?

ARTICLE 19 has long advocated for the right to protest and has published a series of recommendations for both states and protesters to ensure this right is protected.

The right to protest is the individual and/or collective exercise of existing and universally recognised human rights, including the rights to freedom of expression, freedom of peaceful assembly and of association, among others. According to international standards as outlined in ARTICLE 19’s Principles on protection of human rights in protests, states should fulfil the following obligations relating to the right to protest: